The Best Lobster I’ve Ever Had – Sandy Island, Anguilla 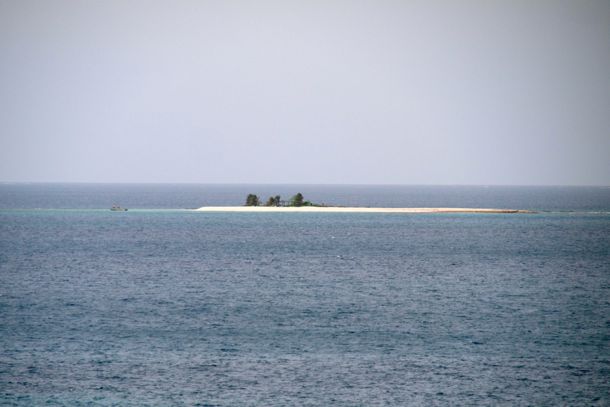 Sandy Island, Anguilla from a distance/SBPR

We’re going where? Oh no, that’s not going to work for me.

This was the prevailing sentiment from several of my traveling companions when we caught our first glimpse of Sandy Island while touring the incredible Sea Villa along Anguilla’s north coast. From there, the island is barely discernible – just a thin line of sand skirting atop the sea with a scant few puny palm trees. We were heading there for a midday beach BBQ, though the apparent lack of shade had some in the group feeling like we were the ones about to get cooked.

In the end, no one backed out, which turned out to be a very wise decision… especially for those of us who love lobster!

Located a quick five-minute boat ride from Sandy Ground, Sandy Island bears every resemblance to every deserted tropical island you’ve ever seen in movies or comic strips… at least from a distance. As you get closer, the island’s small collection of structures comes into view… 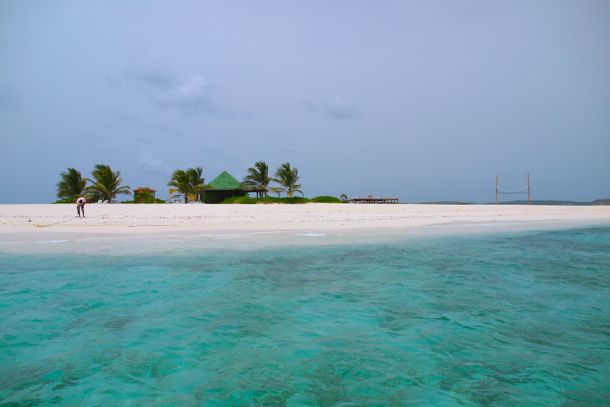 But, it’s really not until you get ashore that you get a real sense for the facilities and just how comfy and accommodating this little beach bar islet really is. 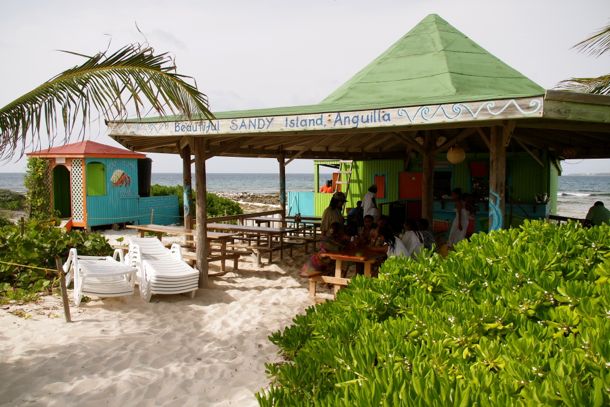 Sandy Island (the island) is owned by the Government of Anguilla, while the beach bar/BBQ there is leased to a private operator. The whole place runs on wind and solar power, with everything that needs to be cooked prepared on a good-sized outdoor grill right next to the sea. 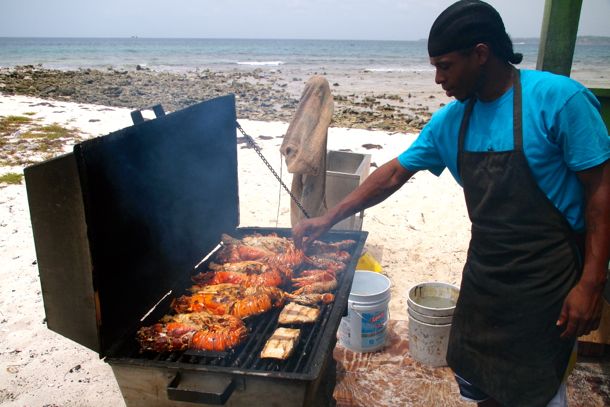 The grill at Sandy Island, Anguilla/SBPR

“The place has been around for umpteen years,” according to Dion, the local bartender whom I met at Sandy Island about a month ago. (Read the full history of the island here). He’d been working there for two years, arriving every day at 9:30am and leaving with the last patrons of the day, usually around sunset after plying them with an assortment of beers and cocktails featuring the likes of Cruzan Rum, Appleton, Mount Gay, Barbancourt and even Rhum Bologne from Guadeloupe.

On Sandy Island, though, no drinks are required to mellow out. The peaceful quiet and tranquility here are more than enough to melt any stress away.

The roots reggae classics being played under the pavilion weren’t really required either. As it says right on the restrooms: 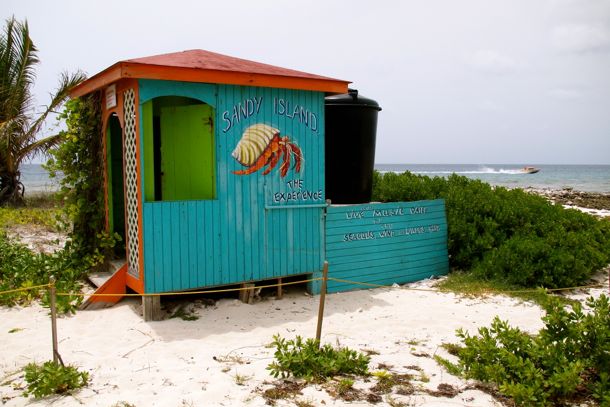 All the relaxing and rustic private island wonder at Sandy Island is to be expected. What I didn’t expect, though, was this… 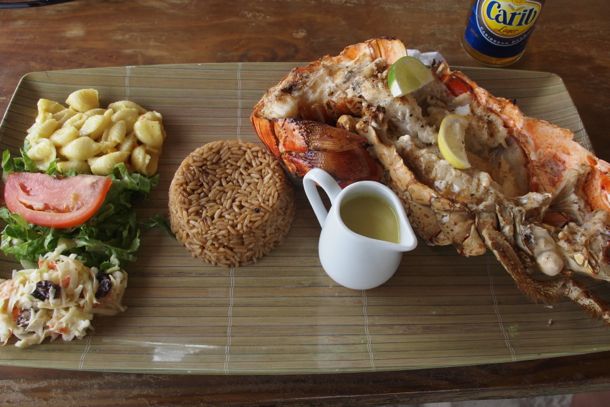 This is the Grilled Lobster-Sandy Island Style platter that you can order daily from the Sandy Island menu. Fresh-caught, grilled and drizzled with garlic and lemon cream sauce, it’s the best lobster I’ve ever had in my life.

It’s a bold statement, sure; one no doubt influenced by my sublime surroundings, that excellent rum selection and the wonderful company with whom I happened to be dining. I’m sticking by it, though. I mean, I literally said as much immediately upon my first bite. And it wasn’t one of those doubtful, questioning statements, either, like: “I think this might be the best lobster I’ve ever had…”

No, my mouth was resolute with the words well before my brain even knew what was going on. It was almost as if my taste buds were doing all the talking while the luscious lobster lulled the rest of me into a blissful culinary coma from which I’d never want to awake.

A post-lunch nap is actually a very good idea at Sandy Island, and thankfully there are a few lounge chairs and plenty of powder-soft white sand to accommodate you… 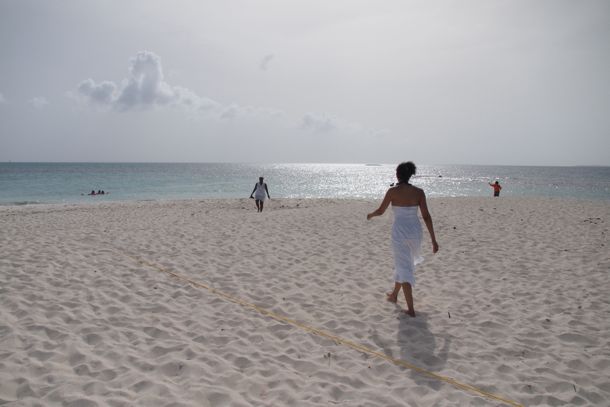 They say there’s great snorkeling all around Sandy Island. They say they serve various other culinary delights as well, including ribs, steaks, BBQ chicken, crayfish, snapper and more. I was so enraptured by my lobster and the beach, though, that I didn’t get a sense of any of those other charms.

All good reasons to make a return visit soon… as if I needed the extra motivation.

Sandy Island is open daily between November 1 and July 31. Make a reservation anytime between August 1 and October 31, though, and they’ll be happy to open up special just for you. If you want to have a private party there at night, you can book that as well.

To get there, catch the Sandy Island sea shuttle, aptly named Bliss, from the small pier in front of Johnno’s Beach Bar at Sandy Ground. The ferry costs just US$10 round-trip, a small price to pay to reach such a priceless destination.

Looking Back at Sandy Island, Anguilla: Photo of the Day

A teensy-weensy island that's more glorified sandbar than even an itsy-bitsy islet, Sandy Island, Anguilla is truly special and always worthy of another look.
683
Shares
🇦🇮Anguilla

The words villa and bargain rarely go together as beautifully as they do at Little Butterfly, Anguilla in 2015.
489
Shares
🇦🇮Anguilla