The Spooky Wreck of the SS Sapona: Uncommon Attraction 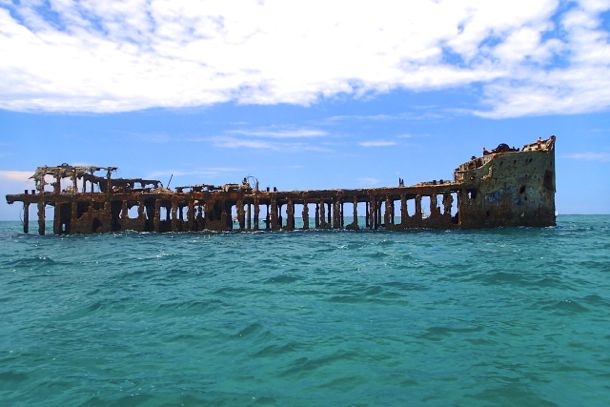 Despite the region’s non-adherence to traditional Halloween tricks and treats, there are plenty of spooky attractions throughout the Caribbean where travelers can get their fright on in the spirit of the season. The wreck pictured here just may be the closest.

This is what’s left of the SS Sapona, a concrete cargo vessel designed by Henry Ford and originally commissioned by President Woodrow Wilson during WWI. (Steel was pretty scarce during the war, thus the choice for concrete.) Anyway, the Sapona never got into the war as it wasn’t completed until 1920, long after the last shots were fired. For a time, the vessel was used to store oil. Famed South Florida developer Carl Fisher also owned it briefly. He planned to convert it into a private floating club in the Florida Keys. When that idea fizzled, Fisher sold the Sapona in 1924 to a mysterious one-armed man with a plan: Bruce Bethel.

It was the era of Prohibition in the United States, and old Bruce was flourishing as a big time rum runner in The Bahamas. With the Sapona, he aimed to expand his operations. He wanted to use the ship as a massive floating liquor warehouse to supply rum and whiskey to the eastern U.S. When the ship ran aground while being towed to Bimini, Bethel thought he might build upon his original plan and turn the Sapona into a nightclub, an attraction that would’ve no doubt lured many a drink-starved American across the scant 53 miles of open water separating South Florida and the Bimini Islands.

All Bethel’s plans changed in 1926, however, when a hurricane destroyed the Sapona, splitting the stern from the rest of the ship virtually ensuring it would remain right where you can find it today. Bethel lost all his booze, money and the ship, which was later used for target practice by U.S. Armed Forces training during WWII. This, of course, contributed greatly to the Sapona’s hollowed, spooky appearance. 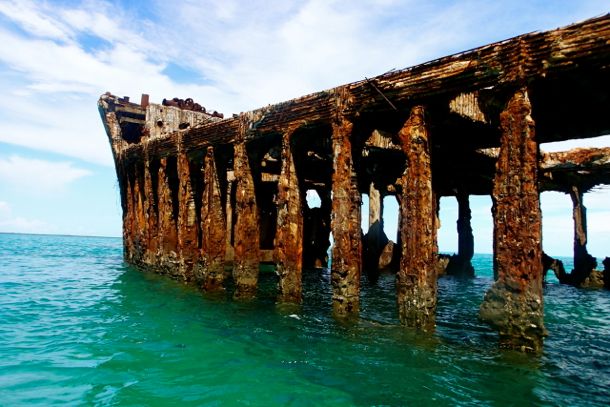 Wreck of the SS Sapona up-close/SBPR

Those who visit the Sapona these days are usually out for thrills of the undersea and up in the air variety. It’s a prime spot for snorkeling with depths approaching a mere 20 feet, good visibility and tons of sea life both in and around the hull. In terms of the creepy factor, it’s only amplified from the inside… 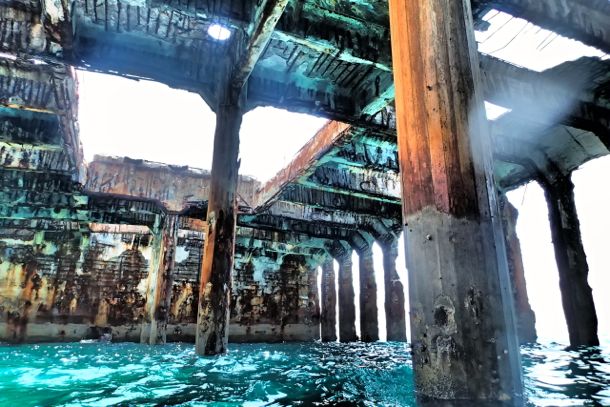 Inside the SS Sapona, Bimini Bahamas/SBPR

Pretty amazing how those massive wooden pillars have survived all these years despite the bombings and harsh sea conditions while most of the concrete is gone.

Atop the vessel, thrill-seeking visitors delight in leaping the 30 or so feet to the sea. On our visit over Labor Day Weekend, air horns would sound from pleasure boats anchored just off the wreck prompting each jump. In a country as flat as The Bahamas, this may be the best (only?) spot for any kind of cliff diving…

Back to the undersea attraction, though. The currents running through the Sapona during my visit were pretty slight, making the snorkeling a breeze, even with one of my nine-year-old twins in tow. You’ll want to be weary of jellyfish that tend to congregate here. You’ll also want to bring along some old stale bread to feed the fish, which my friend Leann was sharp enough to remember, providing a cool little show for the kids. 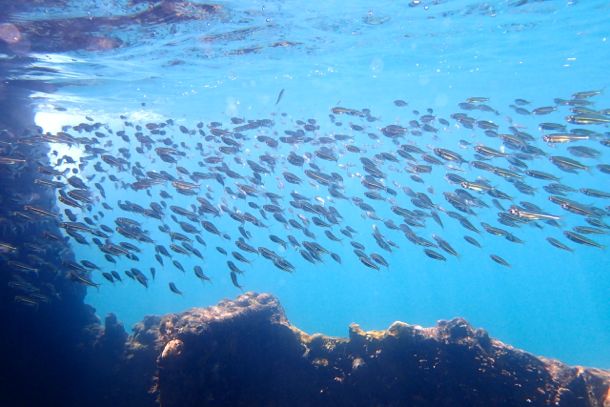 The SS Sapona is almost impossible to miss if you’re traveling to Bimini by boat. It sits off the southern coast of South Bimini Island, roughly three nautical miles from the shore. Check it out for a unique snorkeling and history lesson with just a tad tinge of spooky intrigue…

Channeling the Halloween Spirit at Bimini’s Spooky SS Sapona: Wish You Were Here