Missing an hour? Find some Ginseng UP!: Taste of the Caribbean 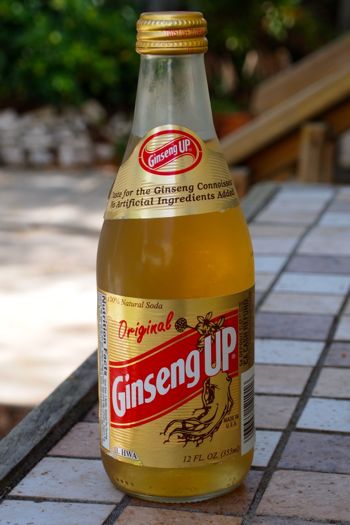 That’s the prevailing sentiment across the U.S. today as the general populace drags along, bitching and moaning at varying degrees over the loss of a very precious hour of time. Oh, we just love daylight saving time in the fall. But, each spring, when clocks are advanced an hour, the vitriol mistakenly directed toward Father Time (real villain: George Vernon Hudson) begins anew, making this particular Monday one of the toughest to endure.

On days like today, you need much more than five hours of energy. You need something that will pick you UP (all-caps required) and keep you going all day. You need Ginseng UP.

This refreshing, power-packed soda is yet another of our favorite Caribbean drinks that barely has roots in the region at all. (Lucozade and Peardrax are two others). The stuff is so universally loved and enjoyed in our islands that I always thought it was developed in Trinidad where the Carib Brewery has produced it under license for as long as I can remember.

Truth is, Ginseng UP is made in the USA, specifically Worcester, MA. The company (also called Ginseng UP) was founded in the early 1980’s, but apparently its namesake beverage never really caught on in the States to the degree it did in the Caribbean. Not sure why, but I, and millions of other West Indian Ginseng UP lovers, am sure glad it found a home in our islands.

Ginseng UP promotes itself thusly:

Packed with premium ginseng, Ginseng UP is an ideal choice for healthy consumers who want a drink that does more than quench their thirst but without the caffeine, high-fructose corn syrup, artificial stimulants, colors, flavors or preservatives found in other functional beverages.

The key ingredient is, of course, the ginseng, which has been used in the Far East for centuries to allay a wide range of maladies. Got stress? Want to enhance your memory? Lower cholesterol? Eliminate toxins? Ginseng’s got you covered on all fronts.

As I alluded to above, ginseng is probably most noted for its energy-boosting benefits, something you’ll surely notice if you pick up a bottle of Ginseng UP. Only question is, will you like it?

Well, I must confess that Ginseng UP, at least in its original formula pictured above, is a bit of an acquired taste…especially if you’re not all that partial to ginseng. It’s lightly-carbonated, as sodas go, with a very heavy ginseng flavor dominating right from the very first sip. Ginseng UP is also a tad bit thicker in its consistency than most soft drinks. This contributes to a strong and lasting aftertaste that’s not for everybody.

The company makes 10 varieties beyond its original flavor, blending ginseng with real fruit flavors like orange, pineapple, grape, lemon-lime, peach, etc. There’s even a new apple flavor, introduced just a few months ago as part of the company’s “re-launch” into the U.S. market.

Will Ginseng UP ever be as popular here in the States where it originated as it is in the Caribbean? Well, considering the country is becoming more and more health-oriented all the time, and people will always have a taste for sodas, I’d say things are looking UP!

Look for Ginseng UP in your local grocery and convenience stores, but be aware that with the new re-launch, the company has changed the packaging (photo). Online orders can be placed here.

Mauby, an island beverage made by boiling a specific buckthorn bark, is a classic taste of the Caribbean that's not for everyone.
27
Shares
Caribbean

Browning sauce at its core is really just burnt sugar. Whether you get it in a bottle or make it yourself at home, it's an essential taste of the Caribbean.
19
Shares
Caribbean

Many Splendored Mango Chutney: Taste of the Caribbean

Here's an easy recipe for making mango chutney, plus a few reasons why you'll want to include it in everything worth eating...
441
Shares