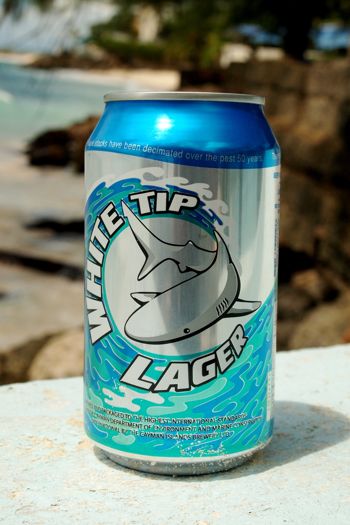 All beers are NOT created equal, a fact made clear at the 2011 Caribbean Rum & Beer Festival in Barbados. Just as I had the opportunity to stand (sit, actually) in judgment of 40 fine rums, so too did an esteemed group of beer experts weigh the merits of 30 regional beers.

In the end there could only be one winner for each of three categories: Lager, Dark Beer and Strong Beer. If you were there and got a taste of the lagers as I did, it’s a good bet you would’ve arrived at the same decision as the judges – Caybrew’s newest creation is also the Caribbean’s best!

The gold medal winner is called White Tip Lager. Never heard of it? No worries. White Tip debuted back in July… of this year… just four short months before taking home the top prize!

This, of course, makes its big win in Barbados a pretty big surprise to some. Like I stated above, though, those who’ve tried aren’t surprised at all.

Crisp, light and smooth in a way that Keith Stone could only hope to some day understand, White Tip was designed to emulate premium European lagers. If you don’t believe it, just pour one into a glass. The rich, golden color will get your attention, but the ultra-smooth flavor will keep you coming back for more time and time again.

Like the other Cayman Islands Brewery (CIB) beers – Caybrew, CayLight and Ironshore Bock – White Tip is a notch above your regular, run-of-the-mill commercial beers, a result of the brewery’s roots as a craft brewer back in the day. CIB employs an extended bit of maturation time for White Tip, resulting in its trademark smoothness and 5.2% ABV, comparable to the 5% ABV of Heineken, Stella Artois and other popular European brews.

Primary happy hour concerns like taste, quality and alcohol content aside, though, White Tip is also notable for the soft spot it carries for its namesake sea creature. CIB donates five cents of the purchase price of each and every can of White Tip to Cayman Sharks, Whales and Dolphins, a conservation project aimed at assessing and preserving Cayman’s wild shark population.

Evidence of the beer’s commitment to helping sharks is clearly evident right on White Tip cans, with statistics on the recent decimation of the global shark population printed along a graphical blue wave that crests near the top of the can. There’s even a QR Code on every can, which takes smartphone users to the Cayman Islands Department of Environment website for more info on the destination’s shark conservation efforts.

So, drinking White Tip Lager actually contributes to saving White Tips and other sharks. Seems as good a reason as any to head down to the Caymans (currently the only place you can enjoy CIB beers) to pick up a case or two and head out on the water.

On my recent trip to Grand Cayman I found a beer even discerning beer drinkers would like. Called Ironshore Bock, it's anything but your typical Caribbean beer.
44
Shares