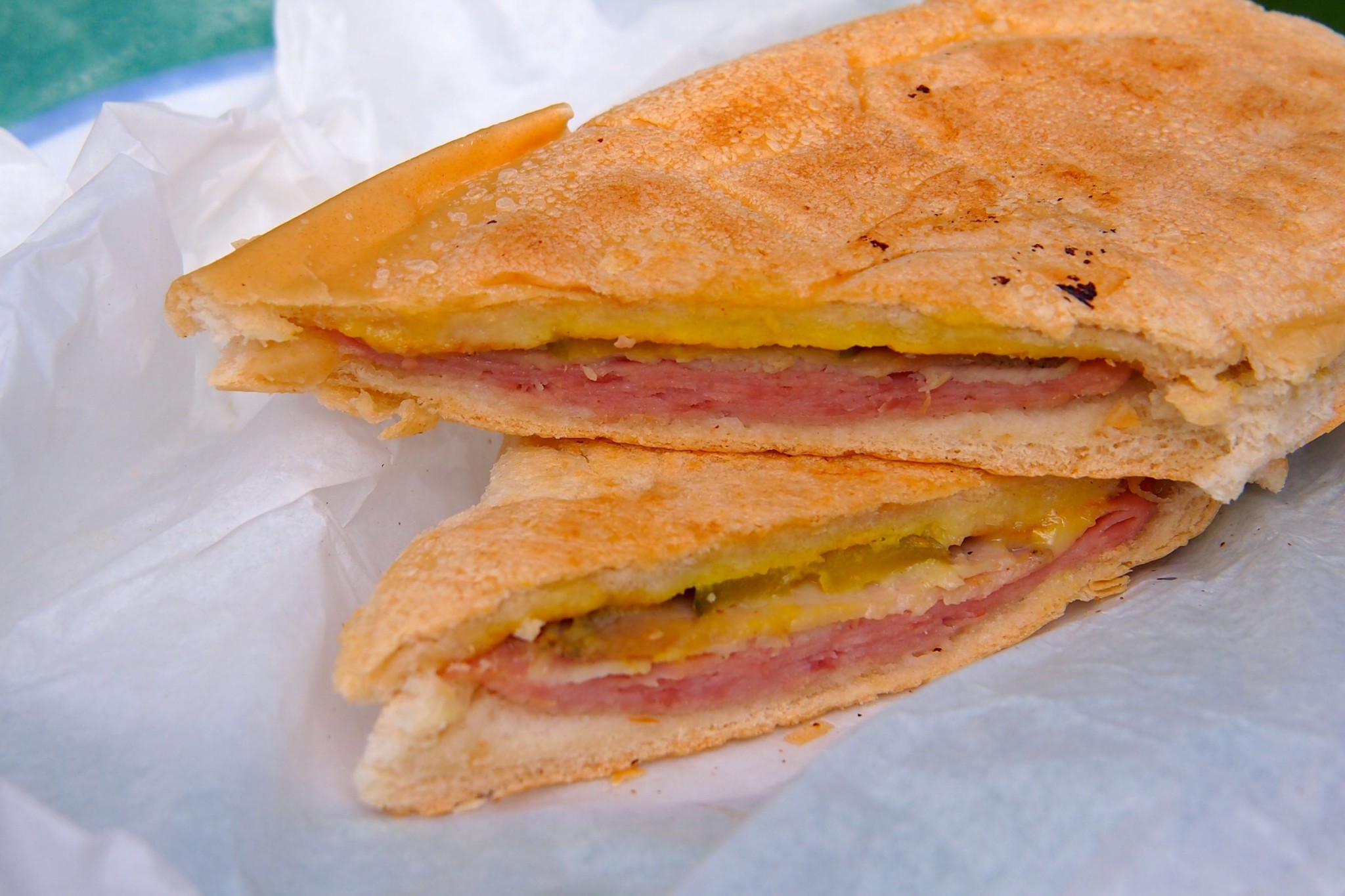 El Cubano, The Hearty Sandwich Born of Tobacco: Taste of the Caribbean

Trini bake and shark is always a welcome treat for me, and you know we just love our Bajan flying fish cutters. Still, the most famous sandwich to come out of the Caribbean is arguably a meaty monster known simply as El Cubano.

Precise origin stories vary quite a bit with this with bocadillo, though it’s popularly believed that the first Cuban sandwiches were served up in Tampa’s Ybor City. It was here that a large population of Cuban migrants had settled way before Castro took over, establishing a once-flourishing cigar industry.

The sandwich, it’s been said, was developed expressly to meet the needs of Tampa’s cigar factory workers, its hearty mix of meats – roast pork and ham – Swiss cheese, pickles, and mustard providing all the fuel the men would need to put in a full day of labor with minimal stoppages.

Miamians will tell you those Tampa sandwiches aren’t the real deal anymore, though.

Mi amigo Rodolfo will also tell you that the Tampa origin story is only half true.

Rodolfo (42) was born, raised, and has lived most of his life in Cuba. (He only just relocated to Haiti a few months ago.) And he can remember enjoying Cubano sandwiches in his youth.

I remember eating it (Cuban sandwiches) in my childhood, either in Old Havana cafeterias or cafeterias on ‘La Rampa,’ the main street in El Vedado neighborhood where most movie theaters and big hotels are located in Havana.

Could it be that the Cubano started in Tampa and was brought back to Cuba? Not the way Rodolfo remembers…

It (Cuban sandwiches) is linked with the tobacco factories that were very common in Old Havana during 1800 and 1900.

Rodolfo explained that as is the case with the Tampa origin story, the Cuban sandwich was really born out of necessity for the cigar factory workers.

In a tobacco factory, when everything was done manually, the process was like a chain of production from one man to the next. Workers got their salaries out of their daily productions, so they needed to work fast and produce as much as possible every day. A ‘heavy’ sandwich was the best solution – ham, roast pork from a pig´s back legs, cheese, and some ‘pepinillo.’

No matter which story you go with, if you like an ultra-filling sandwich on bread that’s pillow-soft on the inside, crispy on the outside, then you’ll love El Cubano. For me, only the original will do – warm and pressed down to get all the meaty-cheesy goodness all mashed together… super delicioso!

If you want to take a shot at making one yourself, here’s a great little recipe.

At El Cocinero, those lucky enough to find themselves in Havana for a night can discover delectable dining, a vibrant bar scene, music, heady cocktails, and an outdoor terrace worthy of the trip alone.
11
Shares
🇨🇺Cuba

Enjoying My First Tiny Taste of Cuba in Camaguey

Finally, after years of traipsing around the Caribbean, touching down in 40+ destinations along the way, I was in Cuba for the very first time.
147
Shares
🇨🇺Cuba

Tu Kola and the Death of the REAL Cuba Libre: Taste of the Caribbean

Classic American cars, Havana Club, John Lennon and sexy beach bums in Cayo Largo are but a few of the main draws attracting us to Cuba. So too is Tu Kola.
10
Shares