Many are the ways in which I’ve seen rum and politics intrinsically linked in the Caribbean over the years, though never quite as creatively as I tasted at Islet View Bar in Dominica this past February.

Some of you may remember that I missed out on the vast array of bush rums usually on offer here when I stopped in on my way from the airport to Rosalie Bay back in June 2012. Thankfully during this latest visit, owner, head chef and bush rum master, Morris “Rudy” Smith, was in the house.

Rudy is one of the nicest, coolest people you could hope to meet in Dominica. I’m not just saying that because he excitedly referenced my earlier story on his place when we met (though that was pretty cool). He’s really just a very warm, welcoming, and very down-to-earth guy devoted to making all who enter Islet View feel perfectly at home.

How does he do it? Well, he’s gregarious and smiles a lot. His laugh is infectious too. He also prepares and serves an excellent, and very over-sized, local breakfast. (More on that another time.)

Then, of course, there’s Rudy’s rum. In terms of variety, the man puts Baskin-Robbins to shame. 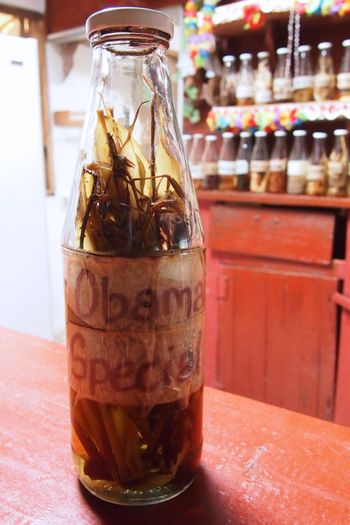 There were more than 100 bottles on display lining the shelves behind the bar at Islet View when I was there, all of them expertly crafted by Rudy using various combinations of herbs, spices, and other special ingredients to address all sorts health concerns. High blood pressure, diabetes, erectile dysfunction, upset stomach, poor blood circulation – if there’s something that ails you, there’s a good chance Rudy’s got a rum to cure it.

Knowing which rum to try to treat your affliction, though, could be a challenge if you just go by the names on the labels. This is where Rudy’s rich sense of humor really shines through, especially on bottles bearing names of political figures.

Rudy’s Obama and Romney rums naturally piqued my interest. I pitted them against each other in a rematch, of sorts, that would no doubt reveal Rudy’s political leanings.

The Obama rum, Rudy told me, contained bois bande, long leaf, and mezé mawee, all things that help with virility, strength, and longevity. As Rudy put it,

The Romney rum also contained long leaf, making it good for a long life as well. The other ingredients, though, spice leaf and pineapple, suggested something else. The real differences between the two became clear with a few sips.

The Romney flavor was sweet and nice (Dare I say soft!), while the robust Obama rum was much more exciting, loaded with bold, spicy flavor and rich character.

Romney? Eh, it was okay.

The comparisons spoke volumes and solicited a lot of laughter and some good-natured political arguments around the bar. This was only exacerbated when I asked to try Rudy’s Skerrit Special, crafted in name of Dominica’s current Prime Minister. To me it was spicy and bold, though not quite as strong as the Obama Special. It also had a bit of a harsh aftertaste that stuck in the back of my throat longer than I would’ve liked.

It wasn’t my favorite, but I was okay with it. Another local patron, though, had a much harsher critique…

Weak and ineffective. You’ll want to get rid of it.

Ahh, nothing like politics and rum to get a few laughs going and make some new friends.

Islet View, better known as Rudy’s around Dominica, is open daily from 7:30am to 11pm. Bring your appetite for authentic Creole food, laughs, and all kinds of creative rums.

The uncommon dive/snorkel experience at Champagne Reef, Dominica is its own reward. The Champagne Reef Happy Juice Rum Punch, though, only makes it better.
433
Shares
🇨🇼Curacao

For a truly uncommon rum 101 course, you'll want to enroll in an upcoming Rum Cruise with RumGallery.com and Island Windjammers.
519
Shares