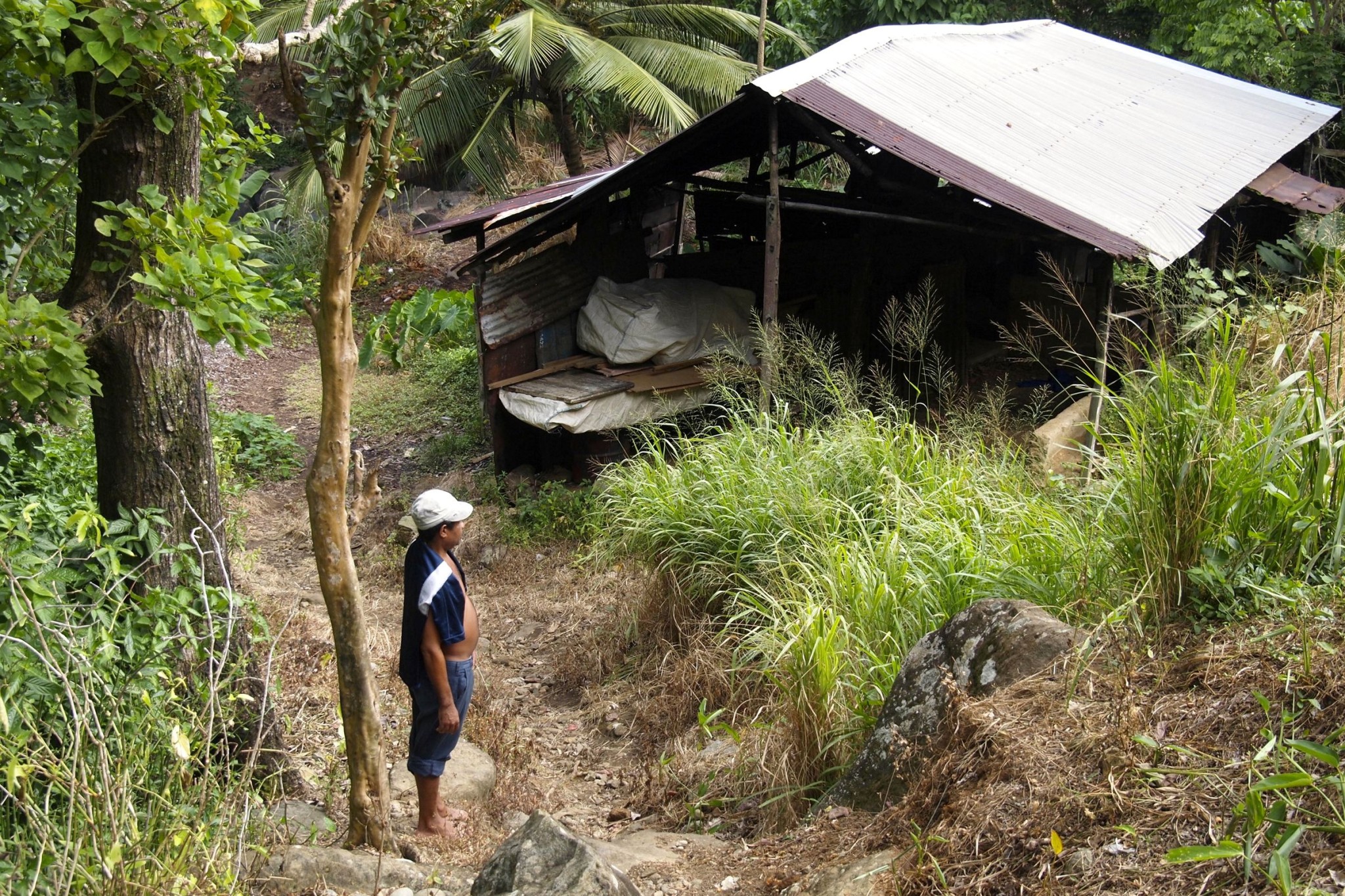 You wanna’ know how I found you?

It was Zahir, my driver and new friend from The Rosalie Bay Resort. He was to have taken me to Roseau earlier in the day, but had been delayed by a few hours. Instead of waiting, as detailed in parts I and II of this saga, I hitched a ride with another Rosalie guest named Daniele. A Swiss-born New Yorker with an adventurous spirit, Daniele was sticking out like a sore thumb at Brenda’s, a gritty and very local eatery/bush rum bar tucked away in the dark recesses of The New Market, when Zahir came bounding in.

You wanna’ know how I found you? I just asked around the market for Steve! Everybody knows you here already!

Ha! It seemed I’d made an impression with the market ladies and other assorted bush rum lovers milling about. I wasn’t quite ready to leave (When am I ever?), but Zahir said he had a lead on the possible location of an actual Wa Bio still.

Wa Bio, also known as Mountain Dew, is the local bush rum in Dominica. It’s not exactly legal, but it is rather good, as we’d just come to discover at Brenda’s. Getting a taste here in the market was great, but I wasn’t about to pass up the opportunity to check out an actual illegal still. A hug for Brenda, another shot, and a few daps for the fellas and we were on our way.

We drove northeast out of Roseau to the South Atlantic coast, a mountainous route (They’re all like that in Dominica.) with some of the steepest inclines on the island. Along the flatter sections that ran along the coast, the road narrowed to the point it seemed you could reach out and run your hand along the sheer rock wall whizzing by on the left, while the crashing waves on the right wet the car.

We didn’t know exactly where we were going, of course. Illegal bush rum stills don’t usually come with printed addresses. Zahir just knew we had to keep heading north along the coast to an area called Petite Savanne, where he’d heard that much of the island’s Wa Bio was produced. Eventually we arrived at this roadside bar… A group of men were sitting outside just limin about. From the car we asked if they knew where we could find a Wa Bio still. The man in the lead image above stood up, smiled, and invited us to follow him.

I’m not going to tell you his name. (At least I don’t think I should.) Let’s just call him Mr. X.

Shoeless, shirtless, warm and friendly, Mr. X lives in the valley that extends behind the bar. He also works in a bay oil factory located just beneath the bar. That’s what you see in the lead image above.

Mr. X knew we were keen on seeing the rum, but he still took his time showcasing the bay oil operation, explaining the production process, the equipment, and the organic crops being fertilized by the spent bay leaves. Then, suddenly, a sly smile crossed his face.

Ahh, the main event! For some reason, though, I thought the still would be hidden among the bay oil operation. Wrong. Getting to de rum would take a bit of a hike. Down a garden path that led away from the factory, we first had to cross this rocky stream… 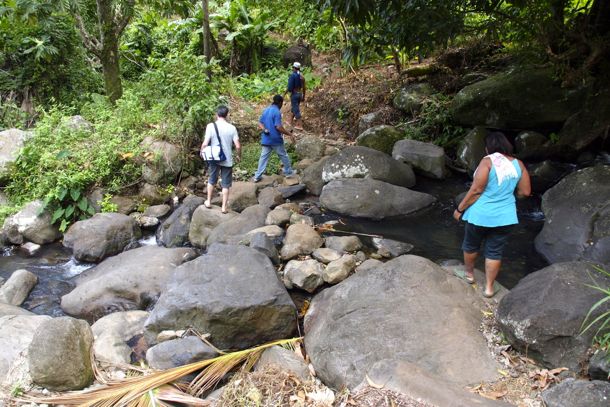 Two minutes later, we found ourselves at the home of Mr. X. 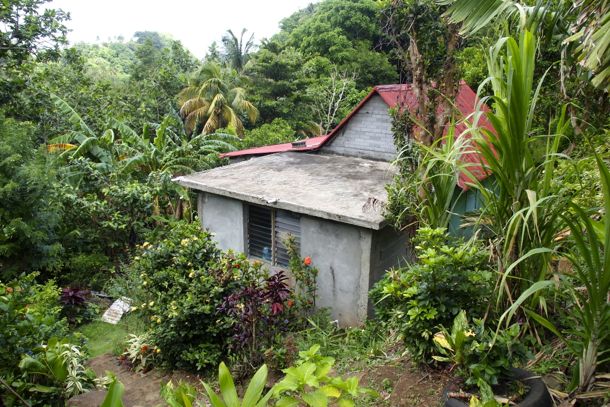 Still we had to keep going; down some stairs, another embankment, past his stock of banana, coconut, lime, and papaya trees… Finally, we were there… 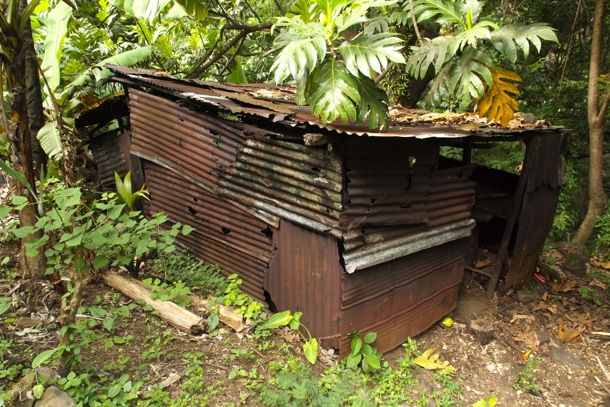 Ramshackle is too rich a descriptor for this, err… 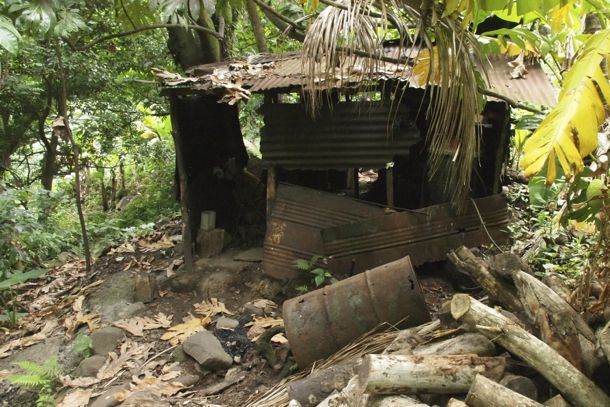 Enter here to see how Wa Bio is made… | SBPR

…wreck of a disaster of a galvanized goulash, held together by nothing more than hope and the whims of nature. Utterly beautiful in its catastrophe, I was entranced by the site immediately upon laying eyes on it.

Inside, Mr. X patiently described the fermentation process – how he grows his own sugar cane and crushes it in a mill, combining the juice, the cane itself, and molasses in a large, blue, industrial plastic vat, allowing the natural fermentation to work its magic on its own under the shelter, though completely open to the elements. His succinct description of the process:

It boil without fire.

Then on to the distillation – Mr. X showing us his crude cooking vats expertly equipped with water coils running through them; the water pulled directly from the nearby river to cool the distillate down to between 80- and 90-proof; the final product, the Wa Bio itself, collected from a narrow pipe in a small yellow bucket.

It was amazing – full-scale rum production in a shack no bigger than a mini van hidden in the jungle! And Mr. X wasn’t the only one plying the rum trade in the valley.

He instructed me to look out into the bush and started pointing to different spots where he knew other stills to be. Some produced molasses-based rum, others specialized in more of a rhum-agricole. All were different in their own way, using closely-guarded family recipes like the one he’d learned from his dad years ago. And there were some 300 of them hidden all around dense jungle like this… There are HUNDREDS of Wa Bio bush rum stills in the wilds of Petite Savanne, Dominica | SBPR

What about the police, I wondered. Did they ever raid the valley?

Long time (they did), in the time of Patrick John (Dominica’s PM in the 1970s), but what happen after awhile he say, well, that is the lifestyle of Petite Savanne; no land to make farming. So, he go back in his cabin and say police, just leave them. Ever since, they never come back and trouble us.

At this point, of course, I was well beyond happy. My mission to get a mere taste of Wa Bio had actually led me to the main source of Dominica’s beloved bush rum in Petite Savanne. Back up at the roadside bar, I was even able to buy a little to take home with me!

This day just couldn’t get any better, right?

No rum journey to Dominica is complete without a stop in at Melvina's in Pointe Michel to enjoy a drink with THE Uncommon Caribbean Woman!
81
Shares
🇩🇲Dominica