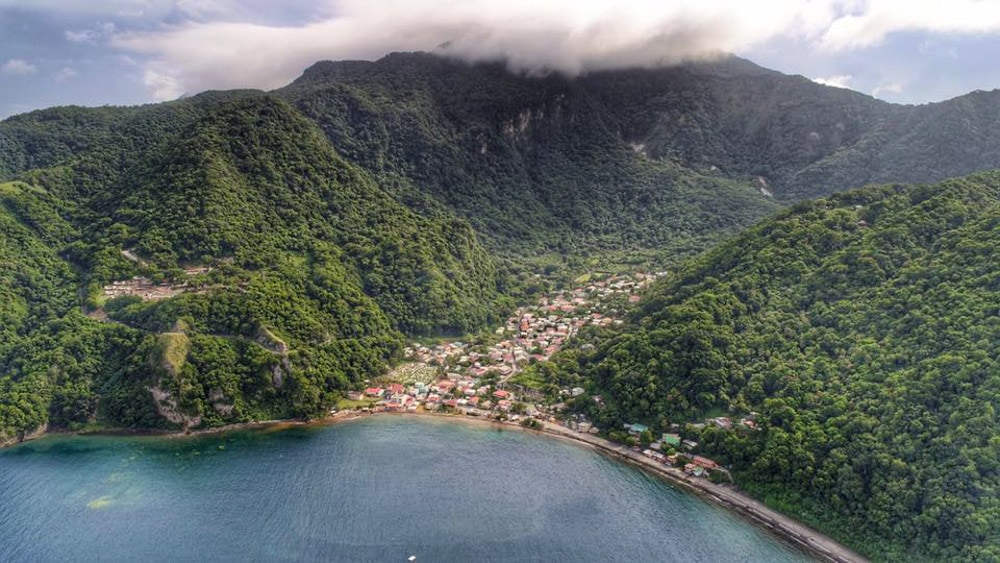 Soufriere, Dominica Before The Storm

There’s something wrong with this picture of Soufriere, the picturesque seaside village at the very southern edge of Dominica. Anyone who’s ever visited would spot the problem instantly.

During each of the handful of times I’ve trekked this way over the past few years, I’ve found Soufriere to be a vibrant place. Never bustling, mind you, but always enticingly alive –– music, laughter, and the occasional ruckus punctuating a quintessentially colorful and uniquely West Indian atmosphere.

Even from the much-removed lofty perspective of this birds-eye view, though, you can tell that the mood in Soufriere was in no way ordinary when this image was snapped. The dead giveaway…

If anything bustles in Soufriere, it’s the fishing industry. A kaleidoscope of boats fill this bay on normal days, moored at rest following late-night and early-am adventures at sea securing the catch of the day.

On this day, though, there wasn’t a boat to be found. This day, quite obviously, was anything but normal.

This was the day before Hurricane Maria.

The Category 5 storm had a profound effect on Dominica much beyond the impact of Tropical Storm Erika, itself described as a once in a lifetime disaster when it hit just two years ago.

When I visited Dominica just six weeks after Erika, I found a strong and resilient country undaunted by the tragedy and well on its way to writing its own recovery story. Here’s hoping that things are much the same way now, and that the boats return to Soufriere Bay soon…

Dominica is constantly evolving, with persistent geothermal-volcanic activity progressively changing the landscape and fortifying her nutrient-rich soil. The result is jaw-dropping scenes of natural wonder, like this small slice of the Indian River.
36
Shares
🇩🇲Dominica

If you like your seagoing vessels with the type of deep hulls that provide stability and added safety, well then the pwi pwi is not for you.
210
Shares
🇩🇲Dominica