I don’t think I’m overstating when I say that River Antione Rum from the island of Grenada is one of the most incredible cases of unexpected contradictions I’ve experienced in all my travels throughout the Caribbean. This rum literally has everything we could ever ask for from our favorite spirit… With one major drawback.

You needn’t look further than our write-ups on Mount Gay or Goslings to see we expect the lessons of a rich past to produce a superior product in the present. And Rivers Rum has possibly the longest history of them all. I know what you’re thinking: doesn’t that distinction belong to Mount Gay? Their slogan is “the rum that invented rum” after all?

Well, yes and no.

If you just go by what’s on the bottle, Mount Gay’s 1703 definitely beats River’s 1785, but that’s not the whole story. The big difference between these two brands is that Rivers is still made almost exactly as it was back in the 1700s—in the same place and even on much of the same equipment!

Visiting the River Antoine Rum Distillery, Grenada in the north of the island is almost like taking a step 250 years back in time. Rickety wooden carts are pushed along ancient tracks to transport the cane and the stone structure containing the distillery has long graduated from the stage of being antique and now lies somewhere between decrepit and disintegrating. Rum was being produced within these walls while Mozart was writing operas! On our drive from Mount Cinnamon Hotel in the south up to the distillery, we got stuck behind a truck loaded down with sugarcane. At the time, I didn’t think anything of it. I just waited for an opportunity, passed the slow moving vehicle and was on my way. It wasn’t until we were beginning to be shown around the distillery that the truck pulled up, ready to unload its cargo!

Yes, year round, Rivers Rum is made with local Grenadian sugarcane. It doesn’t matter that the concentration of the sugar in the cane is highest in the dry season, because the means of pressing the cane is most efficient in the wet season. Which brings me to the next point…

Sure, this doesn’t impact the actual taste of the product, but with new rums like Tres Hombres creating terms like “Fair Transport” to differentiate their product, the rum world certainly has a taste for green and like every other aspect of the process, Rivers Rum has been doing it longer than anyone. 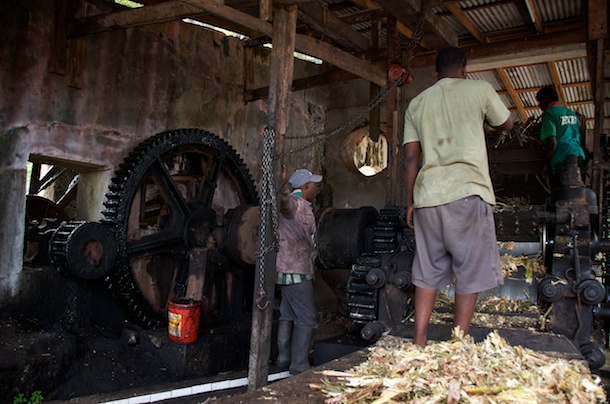 Central to the entire process of manufacturing Rivers Rum, Grenada is a water wheel. Fed by the River Antione, that wheel has been the driving force behind crushing cane for as long as there’s been Rivers Rum—making it the oldest functioning water wheel driven distillery in existence. Visiting the distillery just to witness this ancient machine at work is reason enough to head to the River Antoine Estate.

From the crusher, the cane juice runs down a tiny, open-air wooden guttering to the boiling house. The fires of which are fueled by the dried, crushed cane also known as bagasse or the distillery’s other alternative energy source.

Few things signal quality like the designation of a product being handmade. Once the juice has been filtered by workers literally scooping out bits of cane, it’s then stirred by hand and brought to a boil in the boiling room.

When the correct concentration has been reached, the liquid is ladled by workers into large stone fermentation tanks in an adjacent room. No machines. No pumps.

Then, as far as I can tell, no yeast is added. They simply let the concoction sit in the tanks for a couple days allowing it to be invaded by local yeasts floating around in the air! From there, it’s on to a longer 8 day fermentation and finally distillation.

For the final step, River Antoine Grenada Rum is hand-pumped, hand-pumped from tanks under the building into bottles held near a pipe. If you’re like us, this list of qualities might have you drooling all over your screen at the prospect of sampling some Rivers Rum. It sounds almost too good to be true—like a magnificent, bespoke elixir made from the finest West Indian ingredients in an ageless style.

Remember that one major drawback? This is it.

Still, I’ll be braving a toast of this dangerous brew today and should you ever find yourself in Grenada, visiting this time capsule of a distillery is a must. It truly exists as it has for a quarter of a millenium and it’s just an hour from St. George’s. Plus Rivers is a must try of Grenada rum brands.

The classic daiquiri is light, refreshing, a little tart, a little sweet, elegant, and perfect for a hot day in Cuba. Get a little history with your recipe.
415
Shares
Caribbean

An alcohol delivery is an excellent way to bring your favorite rums of the Caribbean home. So, go ahead, buy rum online. Cheers!
6
Shares
Caribbean