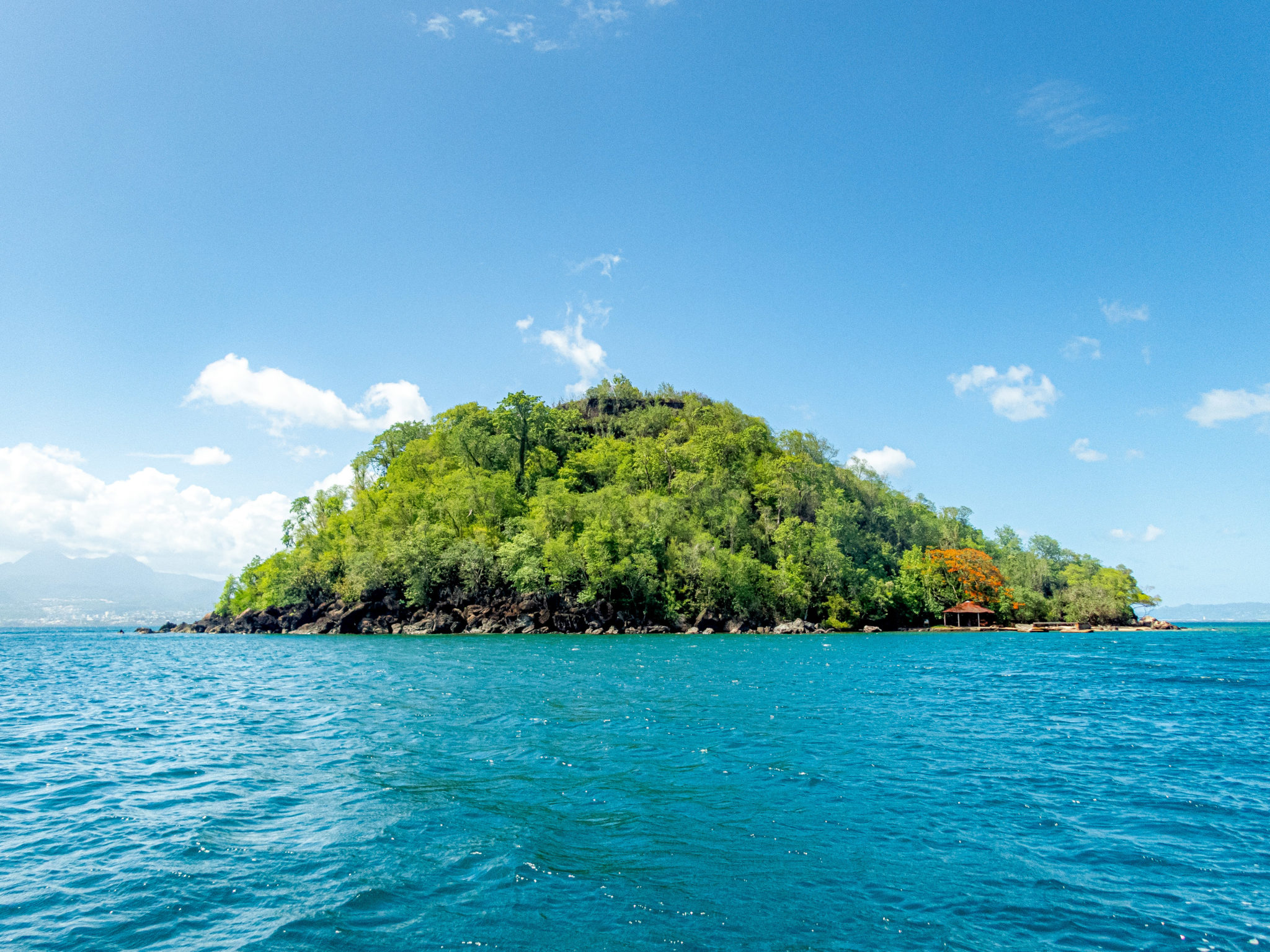 You can’t sail into the Bay of Fort-de-France from the south without passing it. Once you see it, though, you may not want to keep going at all. This is Ilet Ramier, one of the most historic of the 48 islets encircling Martinique.

Conical in shape and rising 140+ feet from the sea, Ilet Ramier covers a mere .012 square miles. A small sandy cove sits at its southern end. The remains of a storm-ravaged jetty and a gazebo shaded over by a brilliant Flamboyant tree are found here as well. From the sea, it looks like a nice secluded spot to relax.

Typical beach pursuits, however, are not the real attraction here.

Hidden among thicket of trees at the crest of Ramier is a long-abandoned fortress. Built in the mid 1700s, the fort was part of a defense network protecting the Bay of Fort-de-France. Judging by this E Drone Martinique video, the French built this particular fort rather well…

Indeed, the fort atop Ilet Ramier appears as well-preserved as any ancient fort not employed as a major tourist attraction that I’ve ever seen. It was built so well, in fact, that French re-commissioned it during World War II!

This, of course, is much in the same way that Fort Saint Louis in Fort-de-France was reclaimed by the French Navy following 9/11.

(Editor’s note: Prior to the construction of the fort, Ilet-Ramier was a notorious spot for illicit trade. In 1708, an outbreak of yellow fever saw the islet become a quarantine home for the ill. That’s a lot of colorful history for such a tiny islet!)

Unlike Fort Saint Louis, though, you can’t just pop over to Ilet Ramier and tour the hilltop fort any old time that you want to. Ilet Ramier is part of the Conservatoire du Littoral, a French conservation organization founded in 1975 to protect sensitive coastal environments. Of note, Ilet Ramier is a prime habitat of the endangered Lesser Antillean Iguana (Iguana delicatissima) species. Two other species of lizard, three types of crabs, and various endangered birds also make their home here.

According to one of the boat excursion operators we met in Pointe-du-Bout a few weeks ago, though, you might be able to make your home here soon as well.

The island is for sale for three million euros.

Seems a rather good deal considering all the well-preserved history and natural beauty here, right?

If you can’t swing that kind of cash, though, you can at least visit Ilet Ramier. Many of those same boat excursion operators in Pointe-du-Bout include stops at the islet in their itineraries. Often, those stops include guided tours up to the fort and a little liming time on Ramier’s petit beach.

Standing on Anse Couleuvre, Ilet La Perle is impossible to miss. It's nice to admire from shore, but it's La Perle's undersea attractions that truly amaze.
40
Shares
🇲🇶Martinique

La Savane des Esclaves in Martinique is a unique and incredibly moving place, made more special by the one amazing man with the passion to make it happen.
9
Shares