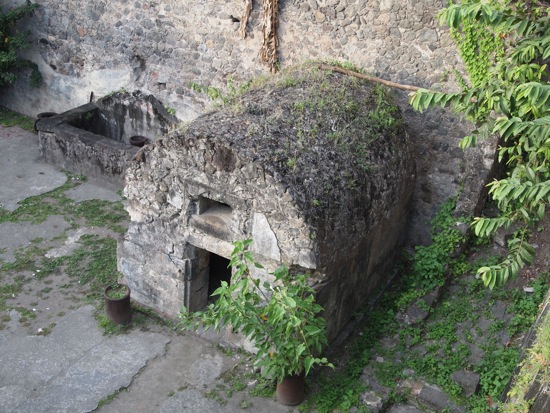 On-Site Martinique: Sometimes it’s Best to be Drunk & in Jail

Comedian Joe E. Lewis once said “It pays to get drunk with the best people.” For a lucky guy named Louis-Auguste Cyparis, it also paid to be drunk in the right place (jail) at the right time (the night before a massive volcanic eruption destroyed his town… and everyone in it).

Cyparis gained fame in the early 1900’s as the sole survivor of the infamous 1902 eruption of Mt. Pelée near the northern seaside town of St. Pierre in Martinique. Truth be told, there actually were two other survivors – a cobbler named Leandre and a little girl named  Havivra Da Ifrile. Their stories, however, lack the panache and flair of that of Monsieur Cyparis.

History likes flair and intrigue, and at the time of the eruption, St. Pierre had plenty of both. Known as the Paris of the West Indies, St. Pierre was among the most modern and progressive cities anywhere. Telephones, only available in 5% of U.S. households at the time, were prevalent in St. Pierre. So was electricity. The city’s theater performances were legendary, as was its art scene and restaurants.

Everything changed on May 8, 1902 when the Caribbean’s Paris became another Pompeii. St. Pierre, the Pompeii of the Caribbean/SBPR

Like Mt. Vesuvius in 79 AD, the 1902 Mt. Pelée eruption was a pyroclastic flow (the first of its kind documented in modern times), a fast-moving, massive cloud of exceedingly hot ash and rock. These aren’t the dramatic, bright-red, slow and bubbling lava flows you often see in the movies. In fact, if you’re unlucky enough to get caught in one of these clouds, you won’t even know what hit you.

The speed of the Mt. Pelée flow has been calculated at 416+ miles per hour, devastating an area of about eight square miles with a mix of poisonous gas, ash, steam and dust estimated at 1,830 °F. The 30,000 residents of St. Pierre all perished in less than two minutes.

All of them, that is, except for Cyparis (okay, Leandre and the little girl too).

As the story goes, Cyparis had been tossed in jail the night before the eruption on a drunk and disorderly charge. Some say he even killed a guy as part of his drunken raging, but details are sketchy at best. His cell, now known as Le Cachot de Cyparis, was the small stone structure pictured above. Even with the protection of the thick walls, Cyparis was badly burned in the eruption, as hot ash entered the cell through the small openings. He survived on his own, still stuck in his cell for four days before being rescued.

Afterwards, Cyparis became a bit of a celebrity, adopting the stage name Ludger Sylbaris and joining the Barnum Bailey Circus to recount his tale for hundreds around the world. Fame quickly gave way to infamy, though, as about a year into his circus career Cyparis got drunk again, stabbed and nearly killed a circus employee, went to jail, and faded into the pages of history. Hmmm, maybe he did kill a guy on that fateful night… His story still plays to crowds who trek to St. Pierre to relive the historic events that took place here over 100 years ago. The cell, much like the rest of the old ruins, sits just as it did following the eruption with modern-day St. Pierre continuing to rise and re-develop all around it. There’s a nice little museum in the heart of the city with artifacts, news accounts and old photos heralding the city’s former glory. There are also nice bars along the city’s slate-grey volcanic sand beach.

Visiting the city is a very moving experience, especially if you take the time to grab a Biere and sit in the little dungeon that once saved the Caribbean’s luckiest and most famous drunk.

Early-Morning Kayaking Off The Caribbean Coast of Martinique

The waters just off the midsection of Martinique's western shores reward the uncommon traveler with all manner of treats.
4
Shares
🇲🇶Martinique

A rich tradition born long ago in Martinique for practical purposes like fishing and transportation, the art of yoles sailing is still nurtured and cherished today through the annual staging of Le Tour des Yoles Rondes.
60
Shares