Montserrat island, like many islands in the Lesser Antilles, is volcanic by origin. The interesting thing about this fact is that it was not the world-famous Soufriere Hills volcano that initially created the island—that honor goes to a long-dormant volcano on the north end of the island. Either way, the island’s features are those typical of a volcanic island: steep hills, rich soil, and something many Americans have never experienced, black sand beaches.

I myself had actually never seen (or at least remember seeing) a black sand beach until just six years ago, so they’re still fairly new to me. That said, I have a similar feeling about black sand beaches as I do for snow. I never saw snow until I was 19, either. After the first experience, I was infatuated with snow for several years. By my third winter, however, I’d had quite enough of the cold, wet stuff, thank you very much, and found myself pining for warmer climes.

So, yeah, black sand is nice and all, but I’m more than just a little biased towards white sand beaches. That being the case, when I heard there was only one white sand beach on all of Montserrat, I just had to pay it a visit!

Similar to persuading Dave to come out for bush rum the night before his big race, I convinced him that the best way to recuperate after his grueling volcano half-marathon would be by lounging on the island’s most beautiful and uncommon beach… It was just a “short” hike to reach, I explained. To round out our expedition, I enlisted another runner: the women’s second-place finisher, Erin.

So it was, that only a few short hours after the morning’s race, we were parking my jeep north of Little Bay at a construction site that serves as the starting off point for the Rendezvous Nature Trail. Dave, astute as ever, noted the bottom of the welcome sign which declared the trek to be 2 hours rather than “a couple of minutes” as I’d misinformed him… He also furrowed his brow at the “Moderate” difficulty designation. For me, the one who hadn’t run a step that day, the hike up was quite pleasant. The path was fairly nonexistent, but it was tough to go too wrong. Just follow the easiest route in a diagonal direction towards the top. You’ll wind upwards over the construction site with a gorgeous view south into Little Bay. Long grasses will brush along your legs in openings and birds will sing light encouragement.

Somehow, I don’t think Dave would describe the experience quite the same way.

Once you finally crest the hill, you’ll be treated to a gorgeous view down into the valley. At its center is a small, abandoned house, and Rendezvous Beach. I imagined wriggling my toes in pristine, white sand and blissful seclusion. While the hike up was through sparse growth and gentle grass, the way down was through thick growth, over rocky steep crags, and past some manchineel trees… One of the most poisonous trees in the Caribbean. To say Dave was not pleased would be an understatement. However, he soldiered on following me and Erin who I might add was effortlessly strolling along through it all… In flip-flops no less!

It was another 20-30 minutes before we reached the bottom. Leading the expedition, Erin abruptly stopped at the exit from the bushes. I pulled up quickly behind and also found myself frozen, staring out from the shaded path upon the beach. She looked at me.

“Are you sure this is the place?”

I couldn’t be certain, but I was pretty sure this was the place… Only it wasn’t the place I’d expected. Not the place I’d convinced my fellow explorers would be at the end of the trail. I worried about what Dave, who lagged behind us by a minute or so, would think.

I was expecting this: 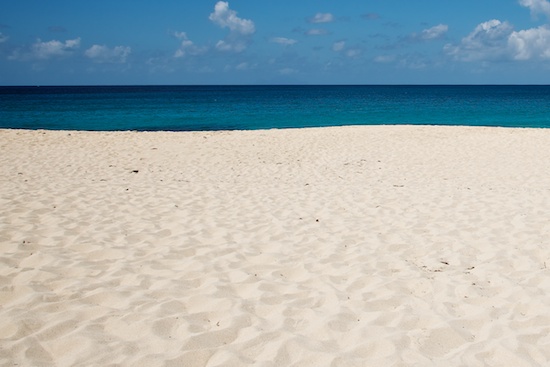 But what we found was this: 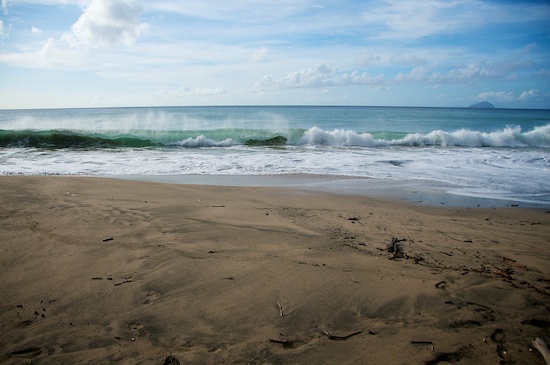 Rather than a white sand beach, it was more like a black sand beach with a little white sand sparsely sprinkled on top like some inefficient camouflage. To make matters worse, the waves were tremendously violent threatening anyone brave enough to enter with a serious tumbling that would end with at the very least a face full of sand… At most? Well… Badly.

When Dave caught up, he seemed nonplussed by the sand, but I could tell he was eyeing the waves wearily. As for me, I’d come this far, I was going to enjoy this beach no matter what! Stripping down to my swimsuit I set out into the crashing waves. It took a few well-timed duck dives and some strong swimming, but before long I was far enough out to be away from the thunderous surf… And it was good.

After some time, I made the perilous swim back to shore.

Thinking we were safe from the malicious waves on dry, black (and white) sand, we popped open some Heinekens, settled down and just limed. Seeing an opening, a wave rushed in engulfing the entire beach sending us scurrying to protect our electronic valuables. With the water’s withdrawal, we all looked at each other’s shocked faces and laughed and laughed…

A few hours later, when it was time to go, the realization surfaced that we hadn’t escaped that sneak attack unscathed. The Caribbean Sea had claimed a victim: Dave’s left shoe. 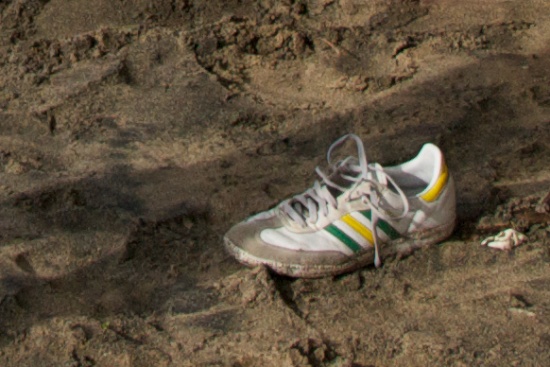 Dave’s left shoe—Gone but not forgotten

Dave’s face clouded over at the thought of the steep, rocky, hour-long hike with only shoe.

I assured him, this would be no problem.

The view from the half-way point along the hike to Rendezvous Beach on Montserrat Island is one of my favorite visuals from this volcano paradise.
17
Shares
🇲🇸Montserrat