Bilí: How to Make (and Enjoy) Your Own Quenepa-Infused Rum

Even if Bush Rum presents too pronounced a walk on the wild side for you (as it did for Patrick with hilarious consequences), there are many, many other homemade rum infusions you can find seasonally at local markets throughout the region at different times of the year. One of my favorites is known simply as Bilí. 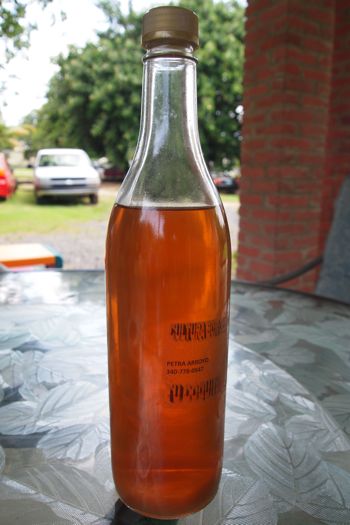 Now, I have no idea where Bilí got his name, but I do know that he’s originally from Vieques, the small Spanish Virgin Island located eight miles off the east coast of Puerto Rico. I also know what makes Bilí so special – my most favorite of West Indian fruits, la quenepa.

As noted here, quenepas go by many different names, but since we’re talking about Vieques, we’ll stick with the most prominent alias used there.

Quenepas are the main ingredient used to make Bilí, along with rum, of course. Sugar, vanilla, cinnamon, and bay leaves are also commonly used.

To make it, all you need to do is gather up a bunch of quenepas (say about 30), peel ’em and mix the fruit (large seed and all) with 1 to 1-1/2 cups of brown sugar in a large pot or bowl. Once the sugar is dissolved into the fruit, that’s when you add the rum slowly, mixing steadily as you go. For 30 quenepas, you’ll want to use a full 750-ml bottle of rum. Which brand, blend or proof is up to you, but in general, the more you like a particular rum on its own, the more you’ll like how it plays with Bilí. (White rum, aged rum, anything goes.)

Now you’ll want to stir in a 1/2-teaspoon of vanilla extract. Then pour your mix into a bottle. The same rum bottle you just emptied into the mix should work fine. Add a few cinnamon sticks, a bay leaf and maybe a couple pieces of lemon grass. Now you’re ready to dig…

Well, you want to make this the authentic Vieques way, right? Just so happens the traditional method of aging Bilí is to bury it underground.

Typically, Bilí must stay buried for about a month. Once resurrected, though, he’s immediately ready to drink!

Chilled or with a little ice, Bilí is sweet, light and refreshing. For someone like me, who loves quenepas and rum, it’s pure perfection.

Bilí is pretty easy to find in Vieques, Culebra, Puerto Rico and some parts of the Virgin Islands during the summer months when quenepas are ripe. Look for them on your next summer visit to the region, and if you’re staying for a few weeks, try your hand and making your own!

Fishing Mosquito Pier on Vieques: Wish You Were Here

The Not So Wild Horses of Vieques

You see horses wandering around on their own across so much of Vieques, in fact, that it's only natural to assume they must be wild.
3
Shares