Point Udall, Home of the Most Exclusive New Year’s Party in the U.S.A. 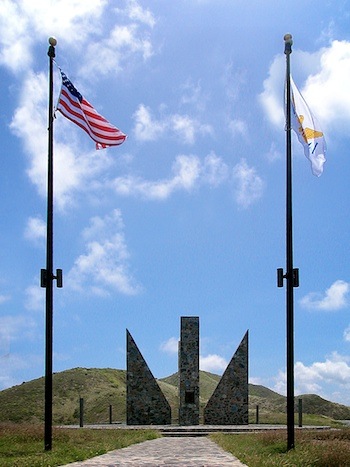 The United States is typically seen as a super ultra highly competitive society. No matter what the setting, circumstances, or surroundings, we Americans are always striving to be first… At EVERYTHING.

At least that’s the stereotype, right?

It may seem funny, then, that if you wanted to be the first American to welcome in the New Year, you’d actually have to travel to one of the country’s most laid-back shores.

I’m talking, of course, about my sleepy little home island of St. Croix, which is where you’ll find Point Udall – the easternmost piece of land in the whole, entire United States of America. Get yourself here and you can boast of being the first person to welcome the earliest sunrise of the New Year (or any new day).

Having grown up there, I enjoyed this uniquely exclusive New Year’s experience many times. Way before the sundial monument you see pictured here was erected to commemorate the new millennium, scores of locals would make the lengthy (by our standards) drive from the more developed central and western sections of the island to this remote spot. From midnight til dawn’s early light, cars would line what was then a dirt road leading to the Point with varying levels of partying going on all around.

The best seats back then were on an old guard rail meant to prevent wayward drivers from themselves becoming the easternmost point in the U.S. We’d sit there cracking jokes, drinking rum and laughing, but always with our eyes trained due east awaiting the first bits of light.

Looking back on it now, the Point Udall experience is definitely one of those special little aspects of island life that I took for granted. It was always neat each year to be able to say you did it; you were there and were the first in the country to see the sun rise on the New Year. Now on January 1st, I usually sleep til the sun is high in the sky. It’s just not the same.

So, cheers to those who will be out at Point Udall tonight… I hope to join you there next year.

Floating Off Into The New Year In St. Croix

Given the choice, I'd most want to start 2019 just like this; floating aimlessly and without a care off the shores of Sandy Point back home in St. Croix.
126
Shares
🇻🇮St. Croix

Starting the New Year First at Point Udall: Wish You Were Here

Ringing in the new year on St. Croix with the sky going purple, red, orange, yellow, and pale blue with the promise of a great year to come!
303
Shares