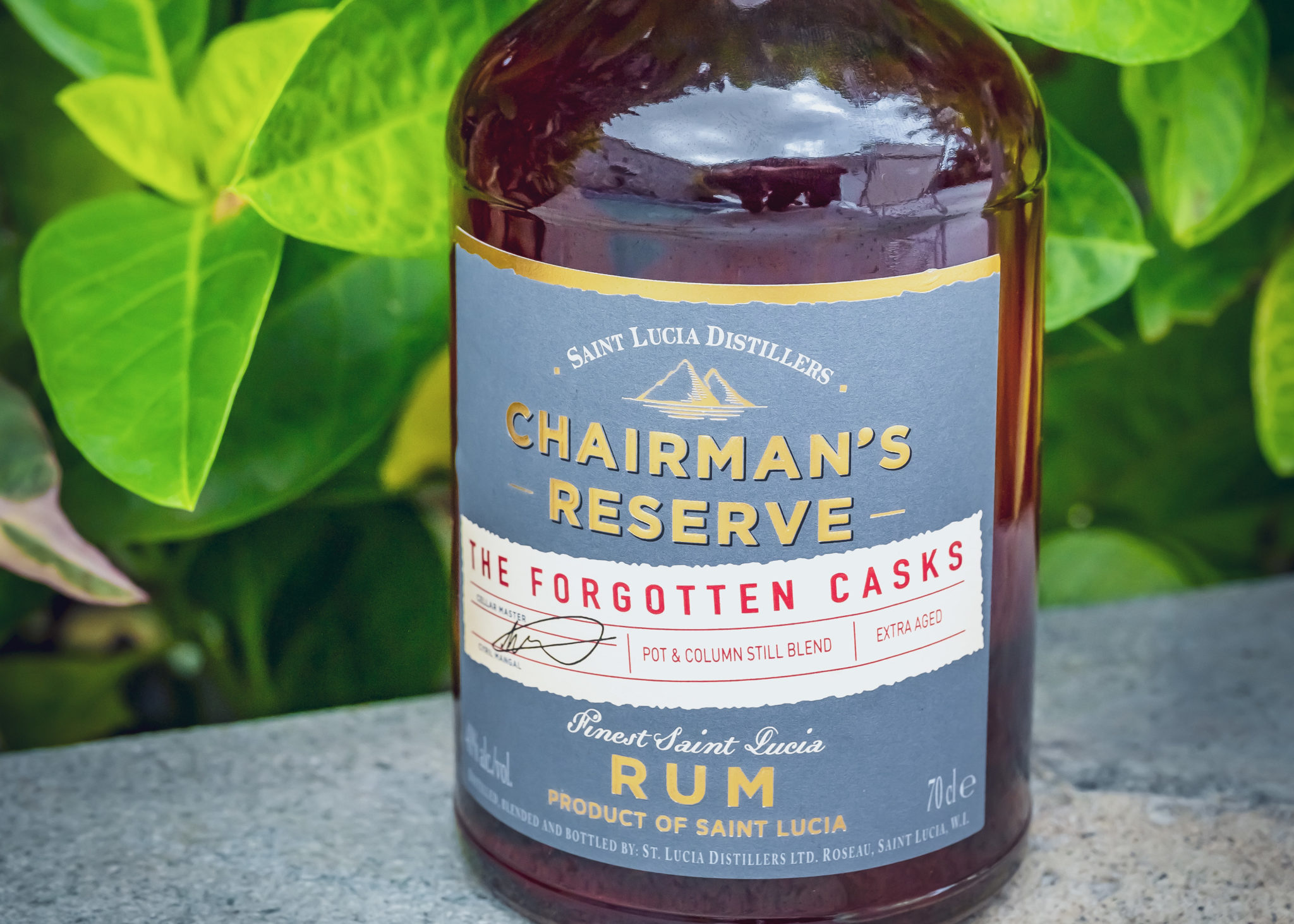 Luckily for me, and everyone else who loves rum, the folks at one of Saint Lucia‘s finest distilleries share an odd quirk with me. The proof is Chairman’s Reserve The Forgotten Casks.

For a limited time, we’ve secured 10% OFF Chairman’s Reserve The Forgotten Casks Rum and over 30 other bottles! To cash in on the savings, just click below and enter promo code UCRHUM at checkout.
Shop now

The benefits of forgetting

You see, I have a terrible memory.

I enjoy meeting people for the first time over and over again. Similarly, I can experience things with fresh eyes more than once. And best of all, sometimes I’m pleasantly surprised by possessions I forgot I ever even had!

Of course, I rarely forget rum… And that’s just what they did at Chairman’s Reserve!

My first brush with Chairman’s Reserve The Forgotten Casks

I first came across this fortunately overlooked elixir at the airport in St. Maarten. After a magical time in nearby Anguilla staying at the supremely magnificent Ani Villas, it was time to head home. I certainly wasn’t happy about this trajectory, so I thought a little retail therapy might lift my spirits. And what better way to lift spirits than with actual spirits!

Tip: Should you also want to leave SXM with a few bottles of rum, skip the first liquor store you see immediately after passing through security. It’s named Island Spirits. Sure, it’s huge, but the selection leaves a lot to be desired. Instead, hang a right and walk just a few feet further to Last Stop Rum Shop. They boast a selection of over 100 rums and, though I didn’t count them all, I can attest to a diversity that could bankrupt a rum lover possessed of less willpower than myself!

Anyway, as I gawked at row after row of beautiful brown bottles, my eyes fell upon the familiar squat silhouette of Chairman’s Reserve.

Yum! Been a while since I had any of that… Wait… What’s this…?

Next to the familiar tan and gold label was something just slightly different. Same black screwtop, same gold trim, but a black label? What’s that say? “Limited Release” Chairman’s Reserve? Sign me up!

The story behind Chairman’s Reserve The Forgotten Casks

The tale behind this hard to find bottle is one of fortunes lost and found. Back in 2007 catastrophe struck the St. Lucia Distillers in the form of a raging inferno. Much of the storage buildings and their delicious contents were ravaged. It was like hundreds of casks cried out in terror and were suddenly silenced!

Mercifully, most of the distillery itself was spared, but this still left cellar master, Cyril Mangal, with a dilemma: what to do with the few robust casks that managed to be saved? Like some wily pirate, he stashed his liquid gold treasure here and there… But unlike the pirate stereotype, he forgot to draw himself a map. And thus, these fortunate casks soon became forgotten casks.

That is, until recently.

Imagine the surprise when these barrels of award-winning Chairman’s Reserve were uncovered having aged longer than usual! One taste was all it took to realize that sometimes it’s good to forget. And contrary to the old adage, these finders didn’t want to be keepers and instead released their treasure as a limited reserve.

The end product is a blend of five and 11-year-old column and pot still rums that don’t go through the final chill filtration other bottles of Chairman’s go through. This results in a slightly different Chairman’s that may have natural sediment in the bottom.

Anyway, with a backstory like that, I couldn’t wait to crack open my duty-free purchases back home and savor a sweet sample!

Once back in New York, though, there was the obligatory immigration line fiasco, a long cab ride home, an overtired two-year-old balanced precariously on the edge of the meltdown abyss, bags to drag upstairs, and on and on. In the end, I crashed into bed as soon as I could… And like Cyril before me, I forgot all about this long-suffering rum.

It wasn’t until a month later that I threw open the doors on my big rum stash looking for something special.

Tucked in the back, patiently waiting, there it was: my limited release, extra-aged Chairman’s Reserve! What was one more month after being forgotten for so long?

So, was the wait worth it? In a word: OhHellsYes!

There’s plenty of spice in the nose, but once it hits your mouth, that’s when the magic really happens. Rich spices envelop your tongue accompanied by a lightly syrupy mix of toffee, coffee, and something resembling raisin. Sublime.

This is one taste you won’t want to forget!

I, for one, know I’ll be refreshing my memory often… Keeping in mind that once it’s done, it’ll only live on in remembrance.

The ti' punch rhum agricole cocktail is a triumph of simplicity that combins just three ingredients with a Martinique joie de vivre that's one of a kind.
449
Shares
🇨🇺Cuba

The classic daiquiri is light, refreshing, a little tart, a little sweet, elegant, and perfect for a hot day in Cuba. Get a little history with your recipe.
413
Shares
🇱🇨St. Lucia