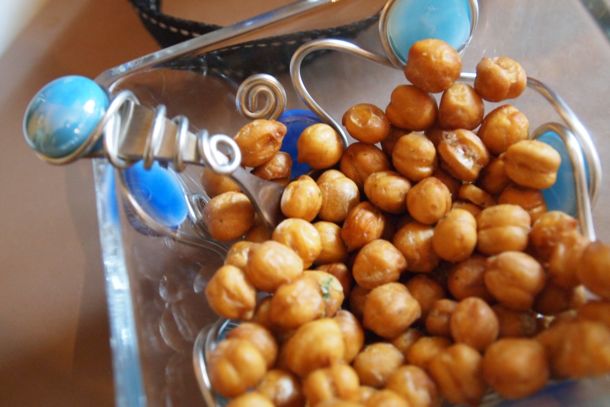 While the good old days are alive and well in many ways throughout the Caribbean, as I argued a few days ago, it is undeniable that certain cherished elements of island life have long ago faded away. For instance, if you grew up in Trinidad during the 1950s and 60s, then the sight, smell, taste or mere mention of these somewhat spicy treats may jog memories of a special night out at the movies.

You’re looking at Channa Nuts, one of the most beloved snack foods to ever come out of Trinidad & Tobago.

Channa are essentially fried or roasted chick peas (garbanzos), seasoned with salt and peppers (some hot) to taste. Some recipes also call for cilantro, garlic and other spices. You can make ’em yourself by first soaking your dried garbanzos in water overnight, then drying, seasoning and frying or roasting them the next day.

(Click here for a detailed rundown on the process.)

Channa Nuts may be easy to make, but they’re generally so affordable and readily accessible in most of the Eastern Caribbean, and anyplace else on the planet where you might find a concentrated population of West Indians, that you won’t find too many people making them at home. Patsy’s Split Channa is by far the best-known brand, its trademark clear bottle complete with white label and red lettering bringing a knowing smile to all who have had the pleasure of sampling this wonderful snack.

Like a lot of the snacks we’ve covered here previously, Channa Nuts aren’t just yummy; they’re pretty good for you too. An excellent source of protein high in fiber, carbs and zinc, Channa is also low in fat, and packs Vitamins A and C, iron and calcium. Sounds like the perfect snack to keep you going during those uncommon adventures, right?

As I mentioned at the start of this post, though, Channa Nuts were also once the snack food of choice for Trinidadian movie-goers back in the day. My Dad, who always makes a point of having a few bottles of Patsy’s around no matter where he’s at, recently told me the story…

When the first movie theaters opened in Trinidad, they had no concessions. Everybody would just buy a bag of Channa on the street and take it into the theater for the show.

Over the years, the Trinidad theaters were modernized and concessions installed, bringing with them popcorn and other more American snacks. Channa, sadly, was pushed back outside.

For a lot of people this may seem like a small thing, but for my Dad (and I’m sure most others who were around back then) the “progress” brought on by popcorn and concessions killed a bit of the special, authentically Trinidadian movie-going experience he once knew.

It’s a shame, really, but I plan to pick up a bottle of Patsy’s and check the movie listings here in South Florida during my Dad’s next visit in late-October. It won’t matter what’s playing on the screen so long as we can sneak in some Channa and enjoy a bit of Old Trinidad nostalgia.

Callaloo: An True Taste of the Caribbean With African Roots

Callaloo (sometimes calaloo, callalloo, calalloo, or kallaloo) is a side dish made of dasheen, okra, and coconut milk that is a true taste of the Caribbean.
117
Shares
🇹🇹Trinidad

This saltfish buljol recipe Trinidad style is a simple to make, spicy way to start the day that's great with johnny cakes, bake, bread, or even a bagel!
481
Shares
🇹🇹Trinidad

Like Currant Rolls, Kurma represents yet another sweet and tasty Trini treat that somehow eluded me during my childhood. Here's why...
248
Shares