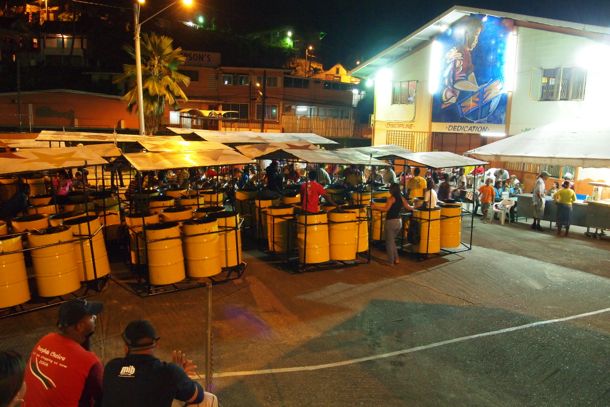 From Pan Yard Practice to Panorama Champs, A Look at the 2012 Trinidad All Stars

Right now, today, and every day over the past two years of days, there’s been no bigger name in the world of steelpan than Trinidad All Stars. The massive orchestra reigns supreme as the two-time defending champs in the Large Band category of the World Series of pan, better known as the National Panorama Competition, held each year as part of Trinidad’s epic Carnival celebrations.

This year’s victory was the eighth in All Stars’ history, their first win coming way back in 1973 with Rainorama, composed by the legendary Lord Kitchener. Like all Panorama wins, the latest All Stars triumph was also born of some seriously hard work. I got to see this first hand during a quick visit to their pan yard in Port-of-Spain back in January. This video above captures a bit of the scene as the group drilled endlessly well into the night…

While it’s easy to appreciate the skill, discipline and dedication of the All Stars musicians in the pan yard video, it’s impossible to have a sense for what the band will look and sound like on the big stage in the Queens Park Savannah under the bright lights of the Panorama Finals. If you don’t believe me, just check out this next video…

"Play Yourself" - Neal & Massey Trinidad All-Stars (2012 Panorama Large Band FINALS)
This is the performance that won the 2012 title for All Stars. Stirring, theatrical and highly energetic, it’s miles from the pan yard session. It’s hard to believe I captured my video a little more than a month before the Finals! Still, you can definitely hear elements of the earlier practice here in small stanzas drilled to perfection.

Seeing the end result is undoubtedly incredible, but having a real sense for how a masterful tour de force like this came to be is truly something special, and another reason why it’s a good idea to get to Trinidad a good 4-6 weeks before Carnival officially starts to really experience what it’s all about.