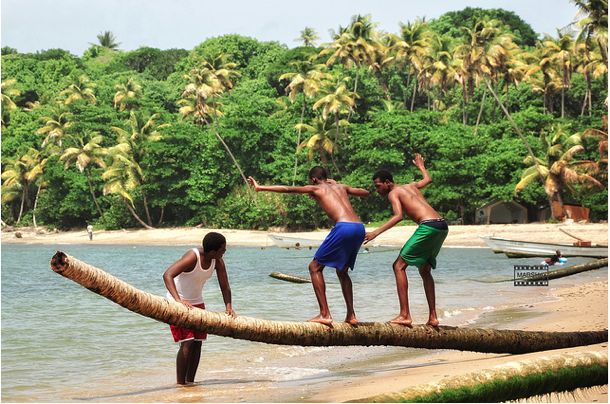 As the middle of three brothers with Trinidadian heritage, I truly, truly love this photo. It was submitted to our Flickr photostream recently by UC-fan Marsh E. (aka: Curepian), whose amazing images of Trinidad are well worth your attention (click here for more). Not only does the image remind me of endless, carefree days of goofing off with my brothers during our childhood years in St. Croix, but it also gives me hope for a special new travel adventure I hope all three of us can enjoy together next year.

The special destination I’m hoping we can visit is none other than Trinidad; land of our ancestors, our favorite West Indian foods and drinks, and the place where the vast majority of our extended family still resides today. By my recollection, the last time we were all there together was in the summer of 1983, so yeah, you can say it’s been a wee-bit too long.

I’m sure that visiting with family and tracing our parents’ history will be big parts of the fun, but hopefully we can make some time for some uncommon explorations to places like Toco, where the image above was captured.

What, besides its name, is so interesting about Toco?

Well, for one thing, it’s the most northeasterly village in all of Trinidad. This also makes it the closest village to Trinidad’s sister island of Tobago (just 20 or so miles north), where our Dad currently lives today.

For another thing, it’s steeped in some serious history.

This is the spot where the English secretly invaded Trinidad in 1631, marking the beginning of the end of the island’s initial 100 years of  Spanish rule. When the Dutch expelled the Brits six years later, it was with the aid of Amerindians living in the Toco region. The Spanish eventually came back, pushing the Dutch out and paving the way for the French to put down stakes here with the 1783 Cedula of Population.

I don’t know about my brothers, but I’m excited to see how all these disparate European cultures shaped the area, especially since Toco was, for a long time, one of the most isolated areas of the island.

How isolated was it?

Consider this: From the earliest days of its colonization all the way up ’til 1930, there were no roads connecting Toco with the rest of Trinidad.

Oh, you could get there from Chupara Point, Cedros Point, Galeota Point and other points around the island, but to do so you’d have to travel by the round-island steamship service, inaugurated in 1818 primarily to facilitate trade. Toco was a prime center for cocoa and coffee production, so it was critical to maintain some linkages, though it was so disconnected to the rest of Trinidad that for a lot of its history the main residents here were actually from Tobago!

Though sister islands and part of the same country, Trinidad and Tobago are quite distinctive in many ways. It’d be really neat to see if/how Tobago’s differences have manifested themselves in this relatively small and long isolated area.

So, Peter and Patrick, what do you say… shall we start making plans for a trek to Toco in 2012? Even if you’re not as intrigued with the area’s history as I am, we sure can have fun trying to re-create the photo above…