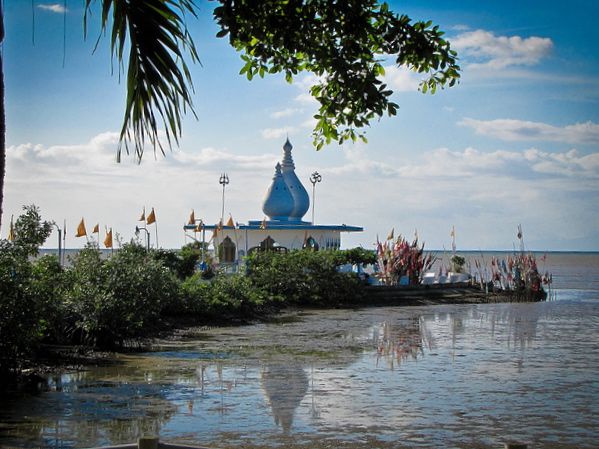 Beside every rum shop, you’ll also find a Church.

The saying is most popularly tied to Jamaica, but as anyone who’s traveled a bit in the region can tell you, it surely could apply to most other Caribbean islands as well. It’s a humorous exaggeration that underscores two fundamental characteristics shared among most of my fellow West Indians: 1) we love rum, and 2) we’re Christians.

Indeed, Christianity is the most popular religion practiced throughout the region, but it’s certainly not the only one. It’s no surprise, really, considering the many different types of people from all corners of the globe that have journeyed here, either by force or on their own accord, over the centuries.

Still, some houses of worship stand out a bit more than others amid all the Church/rum shop combos…

This is the Waterloo Sea Temple, located on the west coast of Trinidad in the village of Waterloo near the town of Chaguanas. The obvious “uncommon” aspect of this beautiful Hindu Temple is interesting in and of itself, but it’s the backstory of how the Temple came to rest at such an unusual spot that is truly fascinating.

The Waterloo Sea Temple dates back to the mid-1940s when a seriously devout and determined Indian laborer named Sewdass Sadhu built the original version on dry-land. East Indian laborers, initially brought to Trinidad in the 1800s to work the sugar cane fields, had few, if any, places to practice their religion formally up until that time. Sewdass, who ran a small grocery store near his home in Waterloo, purchased a small tract of land from the state-owned Caroni Sugar Company upon which he built the original Temple.

Seems the folks at Caroni didn’t like having a Hindu Temple around. Upon its completion in 1952, they ordered Sewdass to destroy his life’s work. He, of course, refused, an act of defiance that earned him a $400 fine for trespassing on government land, plus two weeks in jail; just enough time for the government to tear down the Temple.

Sewdass’ story could’ve easily ended right there, but this was no ordinary guy. As soon as he got out of jail, he set about re-doing his life’s work in a place no one could quarrel with. In his own words:

Armed with a bicycle, a leather bag, a couple of buckets and the type of determination most of us could never hope to understand, he started building his next Temple, stone by stone, in the middle of the sea.

Now, just stop for a minute, take a look at the image above and think about this: there was no island there when he started! He literally built the whole foundation out of stones that he stashed in his leather bag and buckets, trekked to the sea from God-knows-where on his bike, and piled in this spot, 500 feet from the shore, til he effectively created his own island… by himself!

As you might imagine, everyone thought he was crazy. In the June 1997 issue of Hinduism Today, one of the Hindu community leaders in Trinidad recalled:

People used to laugh and make fun of the man when, day after day, he would be seen riding his bicycle for miles to the sea. Many of the villagers said he was mad, but that did not bother him. Look what we have today, a beautiful Siva temple. Is that madness?

It took a good 17 years, but Sewdass did eventually realize his life’s dream again before passing away in 1971 at the age of 68.

The second time was also sweeter for the Temple as far as its dealings with the government were concerned. In 1994, when erosion damaged the structure, the Trinidad & Tobago government stepped in to make repairs, even going so far as to construct a bridge to make the Temple more easily accessible from the mainland.

Today, there are more than 300 mandirs spread across Trinidad & Tobago, many no doubt owing a debt of gratitude to Sewdass and his most unique creation…