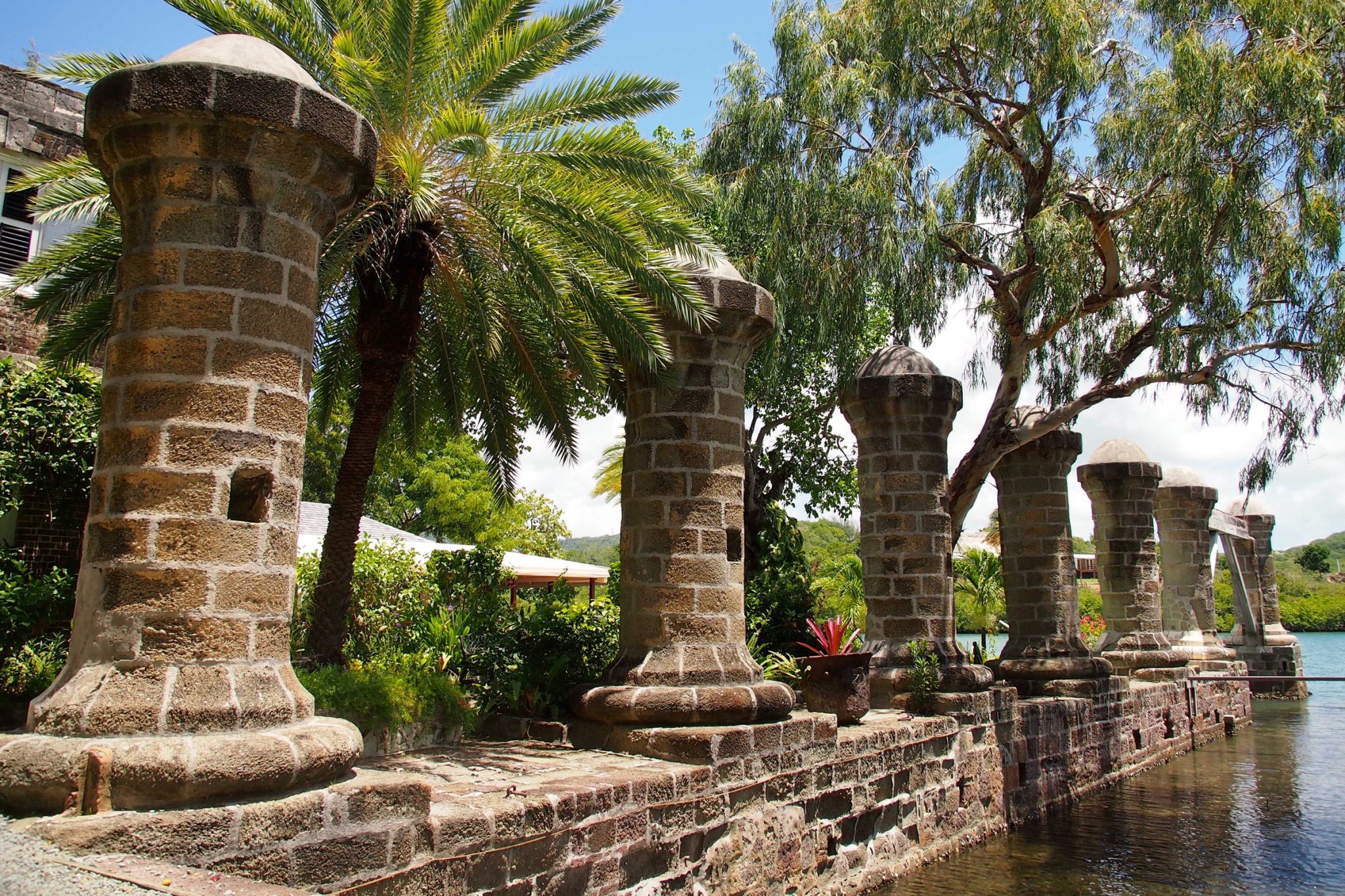 There are lots of great subjects upon which to train your lens at Nelson’s Dockyard, the 18th century British Naval Yard turned yachting center, marina, museum and all-around leading historical attraction in Antigua.

Stately structures espousing the ornate Georgian architecture of 1700s England, upended cannons used to secure ships in port, sailor’s graffiti dating back to the 1740s – the photo-ops are endless and endlessly rewarding.

My favorite, though, has got to be these curious pillars.

Neatly arrayed along narrow waterways with vibrant palms and other trees growing up among them, the pillars are impossible to miss after you exit the old Engineer’s Offices and Pitch & Tar Store, originally built in 1788, which now house the Admirals Inn hotel and restaurant.

But what are they? What was their original purpose?

Well, as with everything else at Nelson’s Dockyard, the answers have a lot to do with keeping ships, err, ship-shape.

Back in the day, an immense Boat House & Sail Loft sat atop these pillars. It’s a bit difficult to imagine now, but the Boat House itself was two stories on its own! Ships would dock in the narrow channel between the pillars underneath the structure. Sails were passed up through a trap door up to the Sail Loft for repair, a pretty nice stroke of ingenuity for 18th century Antigua.

As it stands (or doesn’t), the Boat House & Sail Loft didn’t have quite the staying power of the Dockyard’s other notable structures. The first blow came courtesy of an earthquake in 1845. An 1871 hurricane came next, carrying off with the Sail Loft’s roof. The roof was never replaced.

Before too long, all that was left were the pillars and memories enough to fuel our imaginations and continued photo adventures…

As balconies go, this one at Curtain Bluff, Antigua is about as iconic as you'll find in the world of Caribbean hospitality.
11
Shares
🇦🇬Antigua

Antigua Sailing Week, when over 100 yachts and sailors from all over the globe descend on the Land of 365 Beaches for races, parties, cultural immersian, and more is just over a month away. Still time to witness this epic 50-year-old event in the magical waters surrounding Antigua.
22
Shares
🇦🇬Antigua