The Divine Magnetism of Cuba’s Church of the Holy Trinity 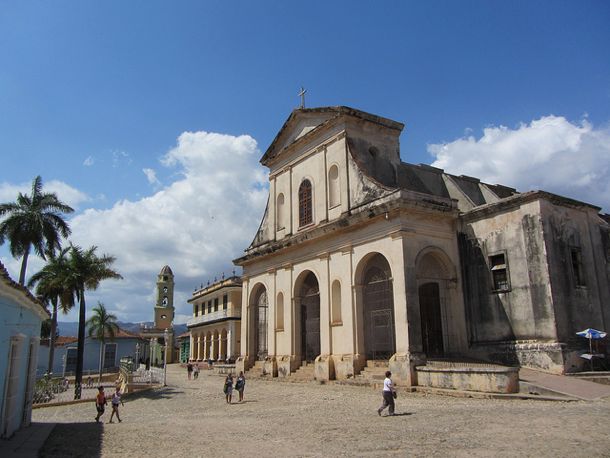 Certain places are so powerfully magnetic, so captivating and enthralling that immediately upon visiting them you simply never want to leave. Most of us do eventually leave in the end, of course, but what if you succumbed one time. What if you stayed?

What if a higher power didn’t allow to go home?

It is the divine implications surrounding that last question that makes this historic church one of the Caribbean’s most miraculously uncommon attractions.

This is the Church of the Holy Trinity, or la Iglesia Parroquial de la Santisima Trinidad, located just off the famed Plaza Mayor in the heart of Trinidad, Cuba. Like a lot of the other storied houses of worship we’ve covered to date, Holy Trinity is weathered, though strikingly beautiful: a marvelous representation of the neoclassical architecture characteristic of so many of Cuba’s most celebrated structures. It also bears a great deal of history, as you might well imagine…

The Church of the Holy Trinity was constructed between 1817 and 1892 on the site of a previous church that dated all the way back to the 17th century! That first church was destroyed in a hurricane, but this one has obviously been built to stand the test of time.

It’s also been built to accommodate a ton of worshipers, holding the title as Cuba’s largest church.

As for the magnetic quality of the place, it all revolves around The Lord of the True Cross, a very special 18th century statue of Christ that you can find in the last place it was originally intended to reside: inside the Church of the Holy Trinity.

The statue was originally supposed to be shipped to another church in Veracruz, Mexico. Three attempts were made to complete the task. Each time, ships carrying the statue were forced back to Trinidad due to bad weather.

So yeah, the whole thing was seen as a form of divine intervention, leading the church leaders to bow to God’s wishes and leave the statue here at Holy Trinity.

There must be something awfully special about that statue…certainly something special enough to make me want to check it out.

These days, when I dream of finally getting to really experience Cuba, my thoughts generally center away from the classic American cars and historic sites of Havana in favor of more peaceful environs like these in La Boca.
23
Shares
🇨🇺Cuba