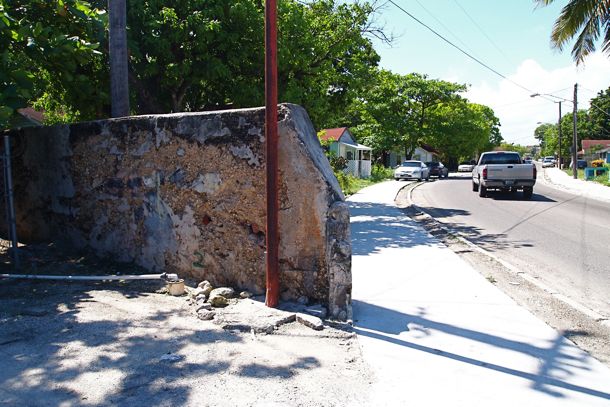 All throughout recorded history, people have constructed walls. Whether built as protection or simply to mark borders, walls have always done at least one thing: divide. In this way, walls often spur controversy, tragedy, or worse. Remember the Berlin Wall? Well, in Nassau there’s an old wall that some say rivals the bad in those German bricks.

The wall in question is called Collins Wall. Its construction was commissioned during the Great Depression by a man named Ralph G. Collins. Described as a “bootlegging millionaire” in Islands in the Stream: A History of the Bahamian People, Collins is said, in some corners, to have built the wall out of a sense of civic duty.

As the story goes, Mr. Collins tried to help the situation by hiring local laborers to build the wall and work in his citrus orchard. At two miles long on three sides and 10 feet high, it was an imposing structure that effectively walled off his sprawling estate from the wild underbrush in the island’s then undeveloped western and southern regions, while also adding a barrier to the rest of downtown Nassau to the east.

More than a few locals that I met during my recent visit to Nassau a couple weeks ago spoke with utter disdain about this wall. Why? An older gentleman taxi driver put it plainly:

Collins Wall separated the whites living downtown from the blacks living in the poorer areas.

To this man, and a lot of other locals I talked to, Collins Wall remains an enduring symbol of segregation. Another, much younger local man I met told me that at one time black people were not allowed in the downtown areas after the work day was done. This is where the expression “head over the wall” comes from in Nassau, as to get to and from work that’s apparently exactly what black people had to do.

Much of this negative sentiment seems to stem from the years following Mr. Collins’ passing in 1946 when his large estate was divided into parcels, though the wall separating the more developed downtown area, predominantly populated by whites, from the new at that time mostly black western areas remained. At varying points along the wall, ladders were erected to ease the process, which of course, is where the tragedy comes in. Accidents along Collins Wall were a common occurrence, the most famous involving a pregnant lady who lost her baby when she fell heading over the wall.

That particular tragedy brought the controversy over the wall to a head in the 1956 local elections. Eventually, starting in the 1960’s large swaths of the wall were removed, opening roadways like the one you see pictured above.

So, the wall itself is now not the impediment that it once was, but clearly hard feelings remain. So much so, that I just had to trek my way to the back of Nassau; well off the waterfront, away from Cable Beach and Paradise Island. Somewhere between Shirley Street to the east and Wulfe Road to the west where remnants of this once mighty wall remain, the true secrets of its origin and Mr. Collins’ real intentions forever hidden…

For all of the outsized touristy glitz that has come to define Nassau, the capital of The Bahamas is actually a prime destination for history lovers keen on exploring African roots and the legacy of slavery in the West Indies.
4
Shares
🇧🇸Bahamas

Hope Town, like everywhere else I've visited in the Abacos, doesn't make any excuses for not being all things to all travelers.
203
Shares