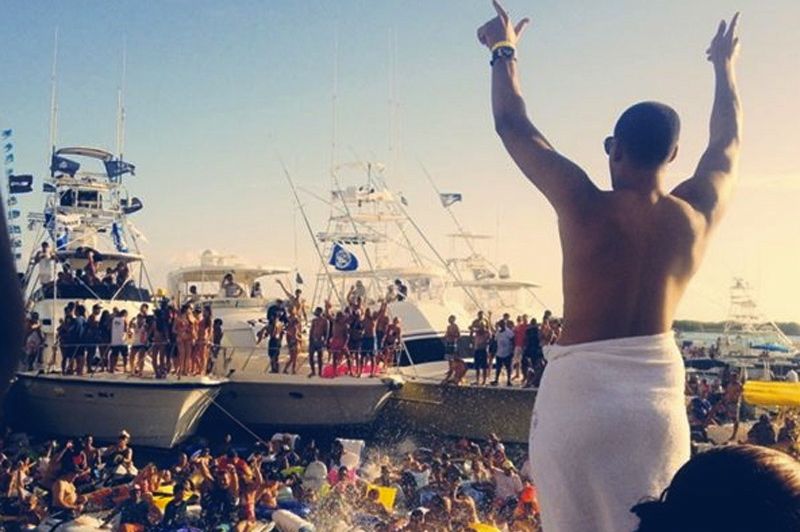 The New Year has been more than rung in most everywhere else around the world, but in a region defined, to some extent, by the phrase “Don’t Stop The Carnival,” the biggest fetes to kick off 2014 are only now kicking into high gear.

The climax of the Crucian Christmas Festival, the Adult Parade, went down in Frederiksted on our home island of St. Croix earlier today, so you know the parties are extending well into the night tonight! Similarly, Sugar Mas in St. Kitts is also in the midst of its final weekend of fun with the always hot Cool Down Fete still to come tomorrow.

The wettest and arguably hottest party, though, is set for tomorrow in an open expanse of water just southeast of the Spanish Waters boating playground in Curacao. It’s called Fuik Dag, and as you can see in the video below, there’s nothing quite like it…

Held yearly on the first Sunday in January, Fuik Dag is one big dance party on the waves drawing together seafaring party people from all over the world to a remote, generally calm corner of Curacao for a full day of jammin’ non-stop! Fueling the excitement is a collection of big time DJ’s like Chuckie and Afrojack who routinely roll up aboard their own boats, turntables in tow, to keep the crowd hyped throughout the day.

Fuik Dag may attract headlining DJ’s, but it’s still an organic celebration, so there’s no cover charge or tickets to buy. Just get yourself on a boat (or anything else that floats) and get yourself here on the first Sunday of every New Year for the party of your life!

Located in the heart of Willemstad, the once rundown Pietermaai neighborhood is now an ultra-hip urban oasis of all things art, fashion, and fun.
57
Shares
🇨🇼Curacao

Of all the as yet unfulfilled dreams I have of adventuring across the Caribbean, the miracle of swimming with wild dolphins ranks right near the top.
26
Shares
🇨🇼Curacao