Counting Down to the 2011 Miami Rum Renaissance Festival 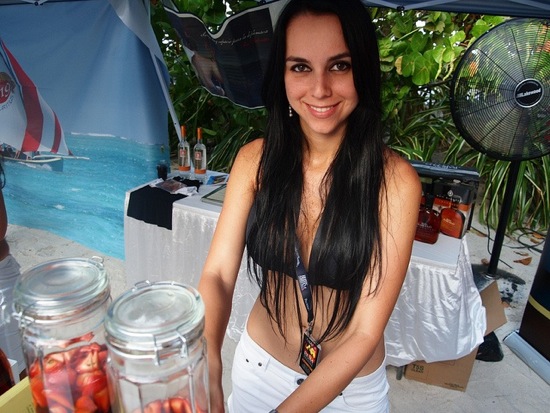 Spring is here, and in the Caribbean that can only mean one thing: RUM!

(Okay, any season is a good for enjoying rum, but follow me a bit on this, please…)

Spring is the traditional harvest time for sugar cane in the Caribbean. Known as La Zafra in Spanish-speaking countries, the harvest period actually begins in January/February and extends into May, allowing for plenty of time to develop the molasses by-product of sugar production so essential to most producing most of our favorite rums.

It’s fitting, then, that this is also about the time when all rum lovers everywhere should be gearing up to head to South Florida for the annual Miami Rum Renaissance Festival.

Officially, at least according to the event press release, it’s known as the largest world-wide gathering of rum enthusiasts, collectors and professionals in the western hemisphere. As we told you last year, though, it’s also the World’s Sexiest Rum Party! Oh yes, you can bet we’ll be there, along with the 3,500 other rum fans anticipated to be in attendance.

What will we be doing, besides savoring a seemingly endless stream of the world’s finest rum in the company of sexy bikini-clad bartenders like my friend above? Well, the thing lasts a whole week, from April 25 to May 1, and even I don’t think we can subsist on just rum and visions of bikini-clad bartenders for all that time. (I can already hear Patrick saying, “Speak for yourself!”). There’s plenty to do throughout the week for rum lovers. Here’s more from the event release…

This week of rum-infused fun begins on Monday, April 25 at the world-famous Mai Kai Polynesian restaurant and bar with a celebration of the infamous Zombie Cocktail, first created by Don The Beachcomber in the 1930s. The Zombie Jamboree will explore the history of this notable concoction and include tastings of historical and contemporary versions of this liquid icon of tiki culture.

Tuesday through Friday evenings, VIPs are invited to experience a series of exclusive rum theme parties sponsored by leading spirit brands from around the world, hosted by leading venues in South Florida.

As we mentioned last year, though, it’s on the weekend during the Grand Tasting Event that the sexy party really gets going. The 2011 edition will go down at the Deauville Resort on Miami Beach, April 30 and May 1, and I can tell you from past experience, it’s an event not to be missed. More than 100 fine rums from across the Caribbean and elsewhere will be on display and available for your tasting.

Wanna’ know what distinguishes one great rum from another? Ask around for members of the International Rum Expert Panel (RumXP), who will be on-hand getting in their final sips to better judge the winners of the RumXP Awards held in conjunction with the event. A few of these guys introduced me to Chairman’s Reserve and Ron Diplomatico last year, so it pays to ask around.

As an added bonus new for this year, the event has been expanded to include an Island Lifestyles Showcase, featuring cocktail competitions, entertainment and all sorts of home furnishings, arts, crafts, fashions and other products designed to help us all enjoy the good life just a little bit more.

In short, it’s an amazing good time, and I hope to see you there! For tickets and more information, click here to visit the Miami Rum Renaissance website.

The Miami Rum Renaissance Festival is maturing nicely, much like a great rum evolves and assumes the distinctive character of the barrel in which she's aged.
261
Shares
🇺🇸USA

What To Expect At The 2016 Miami Rum Renaissance Festival