Strong Back Beer: The Manly Bahamas Stout Made Just for Girls 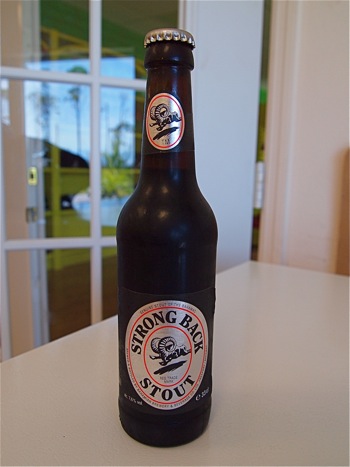 I encountered many great surprises during a brief three-day visit to Grand Bahama Island earlier this year. Hanging out at Billy Joe’s was definitely a treat, and I’ll never forget the Wednesday Night Fish Fry at Smith’s Point (the best midweek party in the Caribbean, IMHO), but probably the biggest surprise to me was this little island’s nice selection of beers.

You see, I’ve come to know many of the Caribbean brews over my regular travels throughout the region, but had never known that any were produced in Grand Bahama, much less four different ones.  All four – Sands, Sands Light, High Rock, and Strong Back – are brewed and bottled by the Bahamian Brewery & Beverage Company, which started production in 2005. We’ll have something to say about all four beers in future Friday Happy Hour posts, but today we’re shining the spotlight on the darkest of the Grand Bahama brews: Strong Back Stout.

Now I may have been surprised to find good, home-grown beer in Grand Bahama, but I sure wasn’t surprised to learn that one of them is marketed as the brew of choice for manly men. Most of the stronger beers and stouts in the Caribbean are positioned this way, playing to the sensitivities of our uber-masculine society.

The macho sexual overtones surrounding this beer are plainly evident in its logo, a hard-charging ram, and its name. As one of the bartenders at Da’ Bus Stop told me during the Wednesday Night Fish Fry: “Strong Back does give you a strong back so you can go all night!”

I was traveling without the wife, so I can’t vouch for any Viagra-like qualities associated with this brew, but I can tell you that its nice, smooth flavor makes it a good choice for a long night of drinking. Not harsh of overly thick (get your mind out of the gutter) like a lot of stouts, Strong Back drinks more like a rich lager with added extra body and flavor. Funny thing is, it’s purposely brewed that way to appeal to… women!

As part of some market research performed by the smart folks at the Bahamian Brewery & Beverage Company prior to launching Strong Back, it was determined that women really enjoyed the taste of Guinness and would drink it more often if it wasn’t so harsh. Thus, the recipe for Strong Back was developed as an easy-drinking version of the world’s #1 stout, appealing especially to the ladies.

Gully Wash Does a Body Good – Taste of the Caribbean

How about this combo: gin, coconut water and... condensed milk. The uncommon marriage of these three liquids is known as a Gully Wash. AKA Sky Juice.
97
Shares
Caribbean

Sea Moss has a rich mix of vitamins and minerals that promote healthy digestive tract; fight cold and flu; and give men an edge in the bedroom.
2.6K
Shares
🇧🇸Bahamas

Sands Beer is a light, golden lager and the best-selling of the four local beers produced by Bahamian Brewery & Beverage Company.
193
Shares