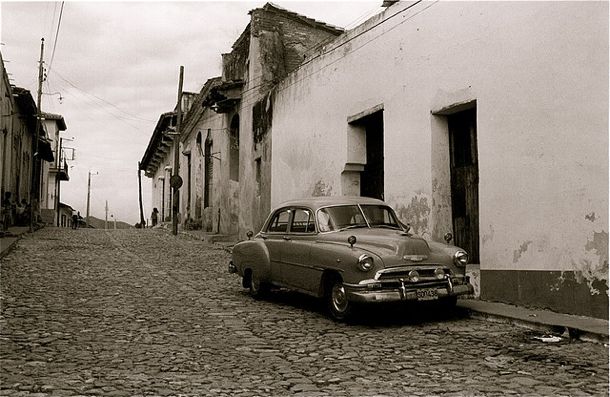 Why do you want to visit Cuba?

For those of us living in the U.S. who’ve been denied the opportunity to experience the Caribbean’s largest island country lo these many years, the answers to this simple question are endless. History, architecture, rum, music, dance, culture, cuisine, spiritual attractions, natural wonders – it’s all just tip of the iceberg for most.

Then, there are amazing classic American cars like this one…

It’s estimated that one out of every eight cars in Cuba is an old American-made automotive beauty bearing such familiar brands as Ford, Chevy, Chrysler and Cadillac. There’s even a few Packards still around.

Cuba’s classic American cars date back to the pre-Castro days of the 1950’s when Cuba was a prime overseas playground for U.S. travelers. American pleasure-seekers came in droves back then, freely sampling Cuba’s many charms while driving around the island in the same cars they had parked in their garages back home.

While the U.S. Government embargo against Cuba has largely kept Americans off Cuba’s streets for 50+ years, Made in the USA cars have lived on and thrived here as no one could’ve predicted during the earliest years of the Castro regime.

I’m absolutely fascinated by this.

There’s a whimsical romance to these old cars that accentuates the “walk back in time” nature of the Cuban experience I hope to enjoy in 2013. On the more practical side, though, you gotta’ wonder: How do they keep ’em running?

Undoubtedly, these cars were never meant to operate for more than half-a-century under perfect conditions. So how, then, do they continue racking up miles after mile when the embargo has prevented their owners from buying American-made spare parts for years?

Just imagine the level of MacGyvering Cuban mechanics must perform to keep these cars on the road!

To me, there’s an incredible story in these cars and how they’re cared for that I’m just dying to sink my teeth into before the embargo is lifted and Cuban mechanics aren’t forced to be so industrious. I’m no gearhead myself, but there’s got to be a lot to be learned about Cuba – the ingenuity and spirit of its people to persevere and overcome all obstacles – just by hanging out at a mechanic’s shop.

Have you ever driven or ridden in one of these classic American cars in Cuba? Share your story with us by leaving a comment below and let us know what we can expect…

The ‘Other’ Trinidad Carnival: Uncommon Attraction