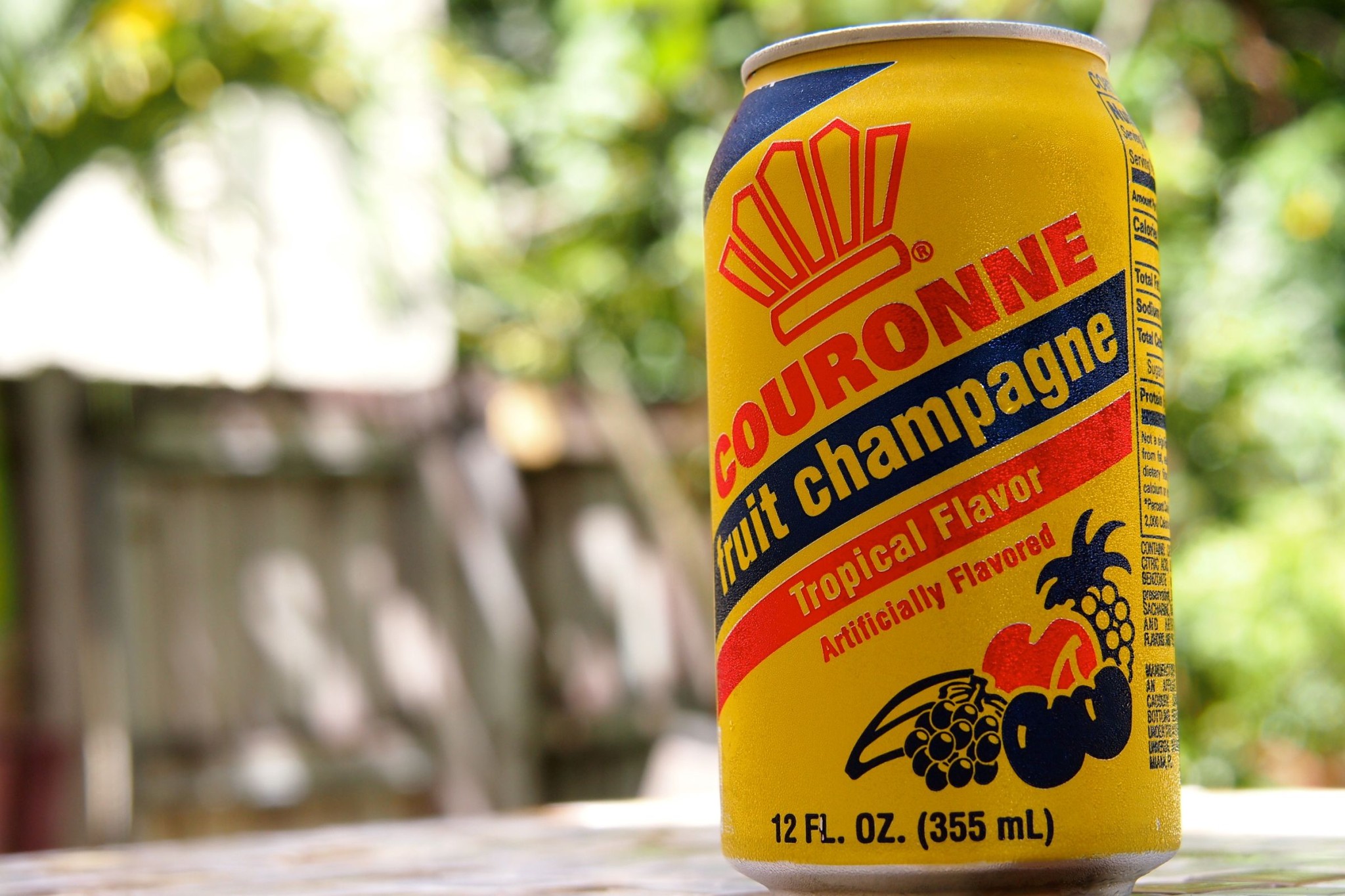 A body can get real thirsty, real fast adventuring around Port-au-Prince. It’s hot and at turns dusty and chaotic. Especially in and around the downtown area near the airport. But if you keep your uncommon antennae tuned to any and all hints of authentic Haitian eats, drinks, and things to do, you’ll come across a truly special Haitian soda: Couronne Fruit Champagne.

What is Cola Couronne?

Couronne soda dates all the way back to 1924, and everyone here seems to love it. Literally everyone I asked confirmed that Couronne is the #1 soft drink in Haiti. There was no second place brand; no honorable mention mentioned. In Haiti, it seems, it’s Cola Couronne or nothing… and that’s not really such a bad thing.

Electric-orange in color, Couronne bears a sweetly-carbonated aroma that takes me right back to my childhood in St. Croix when my parents would buy us cases of Fanta in assorted flavors. They always came in tall glass bottles, which we took great care in returning to our local gas station.

In Haiti, you’ll almost always find Cola Couronne in tall glass bottles as well. My friend Jonathan, who used to work in the Coca-Cola plant where they make Couronne, explained to me that there is no aluminum in Haiti.

Nothing that’s made here comes in a can.

Cola Couronne in a can is actually produced in Miami, so cans like the one pictured here are readily available near my home in South Florida and, no doubt, other parts of the U.S. with sizable populations of Haitian ex-pats.

Each can of Couronne packs 120 calories and 31 grams of sugar. Both measures fall below what you’ll find in a can of Coke. The sodium level checks in at 45 grams, equal to Coke, which touts its cola as “low sodium.”

But who truly cares about nutritional incidentals when trying a new soda? They’re all bad for you, after all. What matters is how it tastes, right?

Well, Cola Couronne tastes great! The flavor leans most toward orange and pineapple for me, though there are hints of other artificial fruits (banana?) in there as well. I say “artificial” as it clearly states on the can…

So yeah, it’s got “Tropical Flavor,” but all of it is “Artificially Flavored.” You won’t care when you get your hands on one, though. Couronne is crisp, not too sweet, and like a lot of things about Haiti, it will make you smile.

Where to buy Couronne Fruit Champagne

Look for Cola Couronne at your local West Indian grocery store, order online here. Alternatively, make sure and try some next time you’re in Haiti where it’s available everywhere.

Amigo Orange soda is bold and refreshing. Think Orangina, only a bit more orangey, if that's possible. The flavor is great, and very Martinique as well.
43
Shares
🇩🇴Dominican Republic

Country Club Soda Frambuesa is the self-appointed national drink of the Dominican Republic. One taste and you'll feel a happiness only found in the DR.
20
Shares
🇲🇽Mexico

Mexico's #1 soft drink, Jarritos is available in 12 different flavors in the U.S. Only question is, are any of them any good?
166
Shares
🇯🇲Jamaica