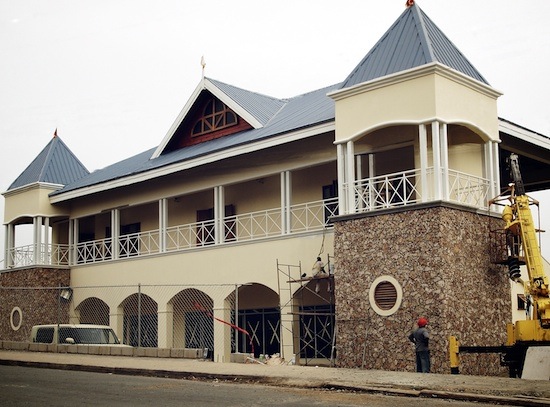 It would be quite easy upon visiting Tobago to surmise that little here is taken very seriously. The entire place seems geared around having a good time, which was all well and good for me when last I visited in March.

That summation, however, would be fasle, and the photo above is proof.

You’re looking at the new state-of-the-art racing facility located in the small town of Buccoo, on Tobago’s Leeward Coast. That racing would be taken seriously to the tune of $100 million (the facility’s cost of construction) somewhere in the Caribbean is not altogether unusual. Horse racing, sailing regattas, triathlons and other tests of speed and endurance are contested throughout the region each year. However, it’s the type of racing that goes down here that makes Buccoo a prime destination for the type of uncommon travel experiences we love.

You see, this is the new home of the annual Buccoo Goat Race Festival. That’s right, they built this $100 million sports palace to race goats.

Now other types of races are hosted here as well, though I doubt they would’ve gone to all this trouble if the crab races that are also part of the festival were the main draw.

I got to check out the new facility just a few days ahead of this year’s races. The main covered grandstand in the photo is flanked by two other stands to the north – one covered, one not – with ample seating for hundreds of spectators. The track, a 100-yard grass field, stretches from the main grandstand, running the length of the two smaller stands, so everyone has an exceptional view.

In a word, it’s impressive. And no wonder; goat racing is pretty important around here.

Tobago bills itself as the “Goat Racing Capital of the World,” and really, who’s to argue? The tradition dates as far back as 1925 when Tobagonians decided they needed a working class alternative to horse racing. Quite obviously, the sport caught on and has grown in prominence over the years. Today, as evidenced in part by the new facility, goat racing in Tobago rivals horse racing in its sophistication, pageantry, style and fierce competitiveness. Or, as our friends at MEP Caribbean Publishers puts it:

Goat racing may have hit the big time in Tobago with the construction of the new facility, but you can still find races contested in more modest surroundings in line with the roots of the sport. Just check out this video to see what I mean.

If you want to experience the full majesty of the Buccoo Goat Race Festival, you’ll have to wait ’til next year. The festival coincides with Easter celebrations on Tobago, with the primary races held on the Tuesday after Easter Sunday.

Oh, and as with virtually all events in Tobago, the races are followed by a big party and street festival. Yeah, goat racing in Tobago is serious – serious fun!

The Thrill of Goat Racing in Tobago: Photo of the Day

The annual spectacle of Tobago goat racing at the multi-million dollar track dedicated to sport is nothing short of exhilarating!
127
Shares
🇹🇹Tobago

Enjoy A ‘Taste’ of Goat Races Day in Tobago

They taste as great as they race! The cheeky catchphrase has long been associated with Goat Races in Tobago, the staple sport of the Easter Season in Trinidad's sister island. I've long wondered, though, if the saying is true.
33
Shares