Caribbean Wallpaper Wednesday: Cuba, Castro, Orchids & The Dangers of Wanting Too Much 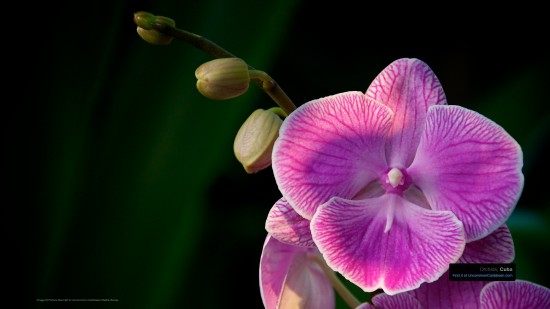 Sometimes it’s possible to want something too much.

This was definitely the case when I was planning my next Uncommon Caribbean adventure. I had it in my mind that I’d finally visit Cuba and spend time in Havana, Trinidad, and climbing the three highest peaks on the island. This was inspired by a trip offered through KE Adventures — a company I’d used a few years ago to climb mountains in Morocco. The itinerary looked perfect. Hiking! Camping! Jungle! Beach! With excitement in my voice, I gave them a call. All was going well… Until I mentioned that a 6 month old infant would be one of my proposed adventurers. “Uhm, sir…”

Yeah, the rep made it clear this would be a bad idea. (As you know, I “settled” for sailing in the Grenadines.)

But I’m not the only one who has wanted Cuba too much. According to some, the CIA has wanted Cuba back on the side of democracy so badly over the years that they’ve attempted to assassinate Fidel Castro. Not once. Not twice. But by one Cuban official’s count: 638 times! There’s even a recent documentary on the subject called 638 Ways to Kill Castro.

But it would seem the only force capable of removing Castro from power was time. Just yesterday Fidel Castro, at the ripe old age of 84, announced his resignation from leadership of the Cuba Communist Party. While doing so, he also began to open the country a bit more towards capitalism. What does that mean for the intrepid Caribbean traveller?

I imagine it means another party will be wanting Cuba for themselves: American Developers.

As Cuba slowly opens up towards capitalism, things will change. Who knows how much. Will it eventually return to its heyday as an American vacation destination? Will Havana fill up with new American cars? Will a Sandals open up on Cayo Largo del Sur?

Again, only time will tell. Our hope is that the simple pleasures of the country, like the orchid found in this week’s wallpaper captured last year in an orchid show, will remain for respectful, adventurous travelers to enjoy long into the future. Download it now and keep Cuba, if not in your hearts, then at least on your desktop.