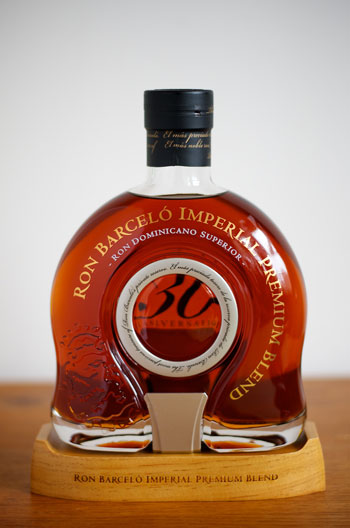 Today marks the start of the London 2012 Olympic Games. And if you’re anything like me, you’re looking for the rum most perfectly suited to toast these amazing athletes in their pursuit to be the best in the world at this, the 30th Olympiad.

So, what will it be for tonight’s opening ceremonies? For so many reasons, it has to be the only rum I know that comes with it’s own pedestal: Ron Barceló Imperial Premium Blend 30th Anniversary Rum — the best in the world, made even better.

Founded in 1930 by Julian Barceló in Santo Domingo, Ron Barceló has grown to become one of the top three rums in the Dominican Republic. One of the “three B’s” as their called: Barcelo, Brugal, and Bermudez.

But becoming the world’s best took some time. It wasn’t until 1980, fifty years later, that Miguel Barceló introduced what would go on to be awarded the distinction of being the best rum in the world by the prestigious Beverage Testing Institute of Chicago: Ron Barceló Imperial.

An honor it received twice.

Like Usain Bolt and Michael Phelps, Barceló now had to answer the question: What do you do when you’ve already proven to be the best in the world?

In the case of those athletes after the 2008 Olympics, it was another four years of fighting their aging, grueling training, competitions and an unwavering commitment to being the best.

That’s well and good for athletes who strive to become one one-hundredth of a second faster, but as for the folks at Barceló, they decided to take a different approach: they changed the game.

In 2011, they formulated the contents of the magnificent bottle you see above. But don’t be fooled, the 30th Anniversary Imperial Premium Blend is more than just a pretty face.

This limited edition, premium blend is the result of 100% Dominican cane, special reserves of Barcelo Imperial rum aged in American white oak barrels made from select cuts of wood with different degrees of roasting, higher aging, and being finished in barrels from Château d’Yquem, a prestigious wine cellar with more than four centuries of history from the southern part of the Bordeaux region.

This. Stuff. Is. Luxurious.

From the moment you uncork the masterfully designed bottle, you begin to experience this rum’s equally painstakingly crafted aromas. Expect vanilla, caramel, chocolate and dried fruit on the nose.

From there, do a reverse two-and-a-half somersaults, tuck into warm, amber waves of smooth toffee, cocoa and notes of oak in the finish.

Like I said, you can’t find a rum more perfectly suited to toast the amazing athletes in their pursuit of being the best in the world.

So here’s to you, Usian, Michael and especially you, Michelle Jenneke!

We’ll be watching you every step, stroke, warmup dance, and back handspring of the way.

Here’s to the world’s best.