Picking up where we left off in Part II awhile back (Part I is here, in case you missed it), I emerged from the ramshackle shelter I found along Isaac’s Bay amid grey skies and a persistent drizzle that showed little sign of letting up. My hiking adventure around the Jack and Isaac Bay Preserve on my home island of St. Croix had barely just begun, but the poor conditions threatened to put an early end to the fun.

Continuing on meant risking my reasonably pricey camera equipment. Turning back meant missing out on the pristine wonders of Jack’s Bay, and hopefully a surprise or two.

Of course, I pressed on… This way to Jack’s Bay | SBPR

Instead of following the Isaac’s Bay shoreline westward toward Jack’s Bay, I trekked back into the bush, noting the signs pictured in the lead photo above, and following this trail up a small hill. The view from the top looking back at Isaac’s Bay proved a nice little reward, even amid the rain clouds… The view to my destination, Jack’s Bay, wasn’t too bad either… 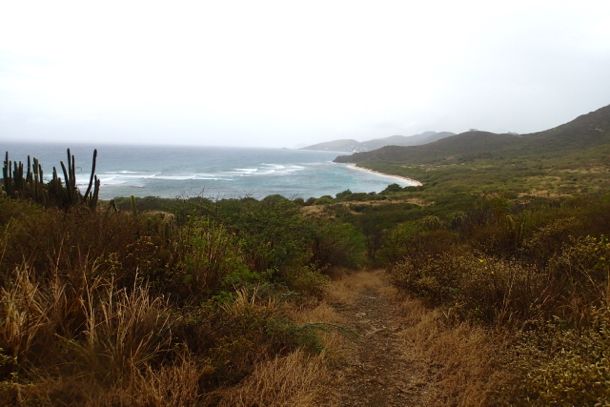 Jack’s Bay in the Rain | SBPR

Here the trail got a little more rugged. Rain and loose rocks made for some tricky footing, while thorny kasha-bush encroached on my path. Still, it wasn’t anything even the most novice of low-impact hikers couldn’t overcome with a little extra care.

Eventually I encountered more signs, denoting bays and hills I had never even heard of. More signs along the trail to Jack’s Bay | SBPR

Clearly, there was a lot more to discover and explore in the Jack and Isaac Bay Preserve than the two special beaches I remembered from my youth.

Eventually, I did make my way onto Jack’s Bay, finding it thinner and more rocky in sections than I could remember. 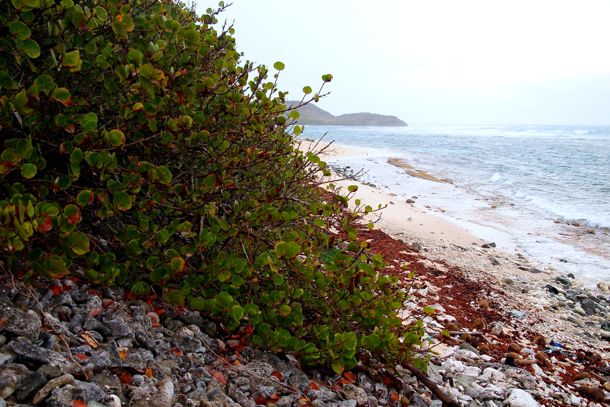 The beach was still pretty nice, but the bigger thrill for me turned out to be trekking through the bush trails and seeing sides of my home island that I had never seen before. Scenes like this on the way to Horsehoe Bay…

On the trail to Horseshoe Bay, St. Croix | SBPR

Or this view of Horseshoe Bay itself, a fringe of reef living up to its name in shape between Jack and Isaac’s. It was right about here that the rain really started to pick up again, forcing me to get a little extra exercise jogging back up to Point Udall. Most of the trails are tidy enough to make trail running a synch here, so I was back at my rental car in no time, my camera none the worse for wear.

In total, I spent about three hours traipsing around the Jack and Isaac Bay Preserve that rainy Saturday morning back in April; re-discovering some old favorite spots while also finding that the island I thought I knew so well still had much to show me. I hope to return soon to wander around a bit more and make more new discoveries.

The Jack and Isaac Bay Preserve offers fun and fairly low-impact hiking suitable for kids and adults alike. If you can walk, you can handle it. Just be sure to bring enough drinking water and maybe a light snack, as there are no facilities of any kind out here.

To get to the head of the trail, just head to Point Udall, the easternmost point of the island (and the entire United States) and park as noted in Part I.

Other than that, just have fun!

Oh, and watch out for rain…

Cottongarden Point divides Boiler Bay with Cramer Park, the beach we frequented most often during our childhood in St. Croix. This was our playground.
45
Shares
🇻🇮St. Croix

It's not the sexiest side of St. Croix; at least, I imagine, not to most people. Personally, though, I love the wild natural beauty of Hams Bay.
237
Shares