On-Site Montserrat: Thanksgiving with The Beatles, the Frogs and Keith Richards 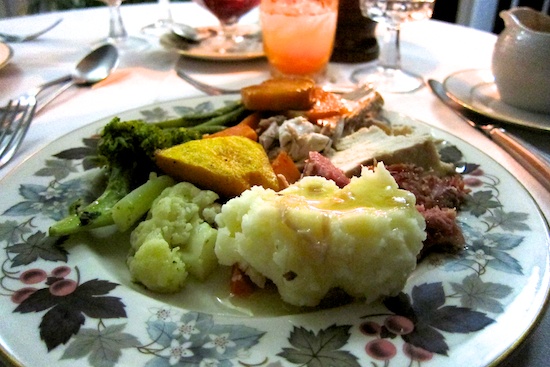 Over the past weeks, The Beatles have been the toast of the digital town with the news that their discography would be available for the first time ever as digital downloads on Apple’s iTunes service. Now, that may be news if you’re into living vicariously through bit and bytes, but for the real Uncommon Caribbean traveler the only way to really commune with the Fab Four would be with a stay at Olveston House in the green heart of Montserrat.

Here George Martin, producer of all but one Beatles album and considered one of the greatest record producers of all time, owns the small, but tremendously welcoming property Dave Keener and I found ourselves at for Thanksgiving Dinner tonight: Olveston House. Just down the hill from the former Air Studios, where one of our hosts, Margaret, actually weathered Hurricane Hugo all those years ago in 1989, we parked ourselves on the verandah to listen to both the Beatles on the stereo and the frogs as they chirped in the darkness.

I’m going to make this very simple for you: this place is special.

The Rolling Stones enjoyed many a beverage on this small, unassuming verandah. Sting and the Police spent their evenings here too. And now, here are Dave and I, preparing to dig into a special meal of our own. We’ve got all the fixin’s: turkey, mashed potatoes, ham, carrots, broccoli, cauliflower, yams and apple casserole, caramelized butternut squash, stuffing, and even some green beans picked fresh from the Olveston backyard this very afternoon.

As you might guess, this Thanksgiving will be one to remember.

After dinner, and a good number of rum punches (for me anyway) talk began to drift to the many traveler-friendly qualities of Montserrat – the pristine diving waters, the many brand new hiking trails, and the shockingly low crime rate… That is, so long as you’re not hanging out with Keith Richards. I found this out due to an anecdote Dave had gleaned from the new Keith Richards autobiography. In it, as The Stones were recording some masterpiece or other, they were interrupted by some “suit” instructing them to try a track again a different way. Keith’s response, here at Air Studios, was to hurl a knife at this poor MBA’s nether regions. It missed the mark, impaling the wall dangerously close to what may have been the true target, but I’m sure he got the point anyway.

Maybe it was all the rum punch, or maybe it was the spectacular night on the verandah, or maybe it was just being fresh in Montserrat, but this seemed like one of the best stories ever… Montserrat just seems like the type of place where legends can be made. I guess we’ll see if we’re up to the task in a couple days with the running of the volcano half-marathon.

I’m Running Around an Active Volcano… What are You Doing for Thanksgiving?