Monkey’s on the Menu in St. Kitts & Nevis?: Taste of the Caribbean 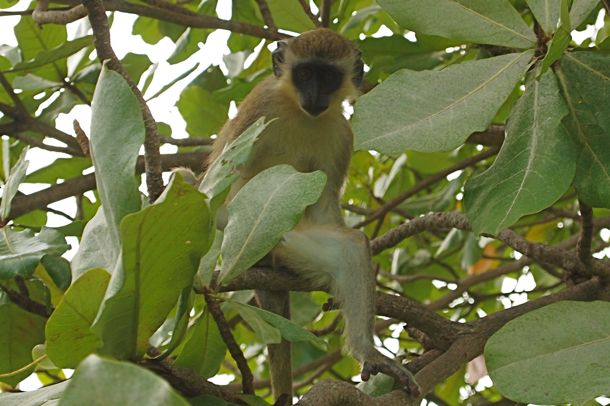 I don’t know that too many people actually visit St. Kitts & Nevis expressly to check out the monkeys, but believe me, once you’re there, they are impossible to ignore. Whether taking a stroll across a golf course, frantically raiding a mango tree, as we witnessed at The Golden Rock Inn last year, or boozing it up with hilarious consequences, the Vervet Monkeys in this twin-island nation put on quite a show.

For visitors, the show is all in fun; an exotic attraction worthy of some serious post-vacation bragging around the watercolor back at the office.

For residents, especially local farmers, it’s quite the opposite. The cute little guys are generally seen as very large pests. It’s a reputation they’ve had for hundreds of years…

Vervet Monkeys were originally brought to St. Kitts & Nevis from Africa by the French in the 17th century. The aristocratic Europeans thought they made nice pets. This may have been true for a while, but when the British ran the French off, they didn’t think enough of their pets to take them along. Instead, the monkeys escaped into the wilds of the islands, quickly multiplying and becoming a nuisance. Within a few years, hunting parties bent on controlling the monkey population had become fairly common among local Kittitians.

Easily the largest source of meat in St. Kitts & Nevis, monkeys were a big part of the local diet well into the 20th century. Modern supermarkets and animal rights activists then combined to help change local tastes, leaving the monkeys to dramatically grow their numbers again.

Today, the monkey pest problem in St. Kitts & Nevis is so bad for farmers that many in support of the country’s right to produce enough food to sustain the local population are advocating to put monkey back on the menu.

You can already try monkey stew, and while I didn’t see it as an option anywhere we ate, I’m sure you can get it at more than a few local places.

Our exotic culinary tour of the Caribbean has already touched on iguanas, turtle meat, fish eyes and souse…

Hmmm… not sure about that one…

It was 35 years ago today –September 19, 1983, Independence Day – that the national flag of St. Kitts & Nevis was raised for the very first time.
92
Shares
🇰🇳Nevis